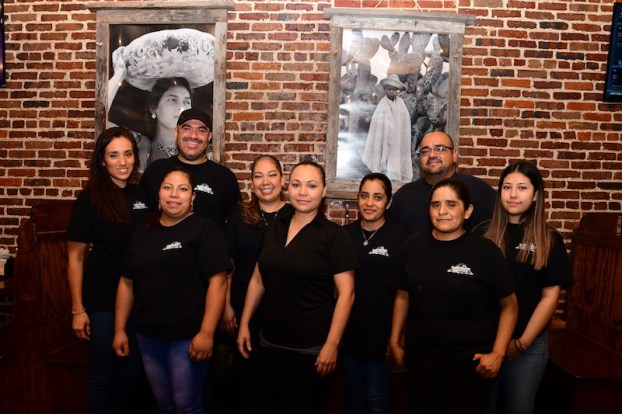 The staff of Valle Grande Mexican Grill are like family. (JOYANNA LOVE/ ADVERTISER)

A Taste of Mexico: Valle Grande is a popular spot in Maplesville

The scents of onion, tortillas and flavorful meat greet customers as they wait outside on a busy Friday night.

Valle Grande Mexican Grill has become a destination restaurant in the town of Maplesville, popular with residents of not only the town but Chilton County and beyond.

Sergio and Monica Sanchez opened the restaurant in 2017.

While it shares a name with their original restaurant in Valle Grande, the goal from the start with the Maplesville restaurant was to be able to do things their own way, uniquely Sanchez and authentically Mexican.

The couple had purchased the building in 2016 and spent about a year getting it ready.

At the location in Valle Grande, the couple was limited in some of the things they could do because they were renting the building.

“We weren’t really able to say that we had worked on it with our ideas, our vision,” Monica said.

They wanted to have a restaurant that really reflected who they were and their Mexican heritage.

“We focus a lot on how we grew up,” Monica said.

Both are from small communities and lived close to family members.

The Maplesville location uses photos from Sergio’s hometown of Michoacán and Monica’s hometown of Jalisco in the décor. Some of them Sergio took when they visited.

His favorite is one of an elderly man on a bicycle in Jalisco.

Monica’s father moved his family to Texas after years of working in the U.S.A. and visiting his family in Mexico. The paperwork took about two years in the 1990s to get everything ready for the family to move. The family eventually moved to Montgomery.

Sergio’s brothers had moved to Wetumpka, and he joined them when he was 15.

He started working in his cousin’s restaurant.

The customers are the highlight of the restaurant for Sergio.

“We fell in love with the town,” he said. “That is why we decided to move and build a home here.”

The family moved to Maplesville in 2018.

“The main reason we decided Maplesville is because we loved the school,” Monica said.

Inspiration for food comes from their heritage, their family and what they enjoy cooking at home.

Monica said customers are now the “people that we go to school with that we see at the pharmacy, and it feels like the restaurant literally brings whole families together.”

It is common to see customers go over to another table to say hello to friends.

“There is nothing else here that brings them together like the restaurant,” Monica said.

“Good food and a good-family environment” is how she described the restaurant.

Good customer service and high standards for the food is important to the couple.

Saturday specials are used as a way to introduce customers to authentic Mexican dishes that are not on the menu.

“This restaurant has become more than just a restaurant,” Sergio said, agreeing with Monica that it has brought the community together.

The Sanchez approach to the food at the restaurant shifted about two years ago, when Sergio, out of necessity, started working in the kitchen.

Previously, the restaurant had been recipes that had been used at restaurants that Sergio’s brothers owned. With Sergio in the kitchen, the focus on food turned to being authentically, grilled Mexican food as opposed to a Tex-Mex fusion that many were used to.

In 2020, business was slow when restaurants could only do carry out orders because of the COVID-19 pandemic.

“We tried to create like a family package, because at that point we didn’t know what was happening,” Sergio said. “A lot of people were out of work … We were trying to make like a family meal really cheap, so people would be able to take food home. We did that for like three or four months.”

Sergio said this down time allowed him to work on a new menu, which was smaller, but focused on being authentic without repetition of dishes. With a smaller menu, the emphasis for excellence also increased.

The goal is for the food to taste like it would if someone was in Mexico in the town where the recipe originated.

The next iteration of the menu is focused on getting them even closer to this goal.

“Make it shorter, so if we have 20 items, those 20 items will be incredible,” Sergio said. “You can order one or the number 20, and it will be (an) amazing dish because we are just going to dedicate ourselves to those dishes.”

The couple said the employees make this level of excellence possible and keep the restaurant a success.

Each plate is viewed in light of if the person would be proud to serve it to their own family.

The couple said the Maplesville restaurant has a combination of passion and attention to detail that is not easily replicated.

The staff are like family and spend time having fun together outside of work a couple times a year.

Several of the Miss Queens from pageants in Chilton County attended and assisted with Care Net of Chilton County’s first... read more