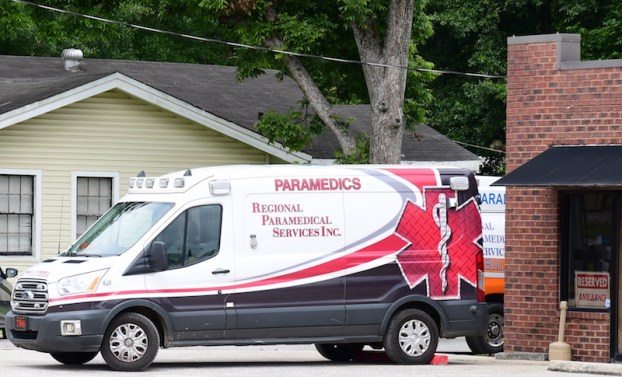 Clanton will have a designated ambulance, probably by the end of the year, following approval of an agreement between RPS and the Clanton City Council. (FILE)

911 Board to rebid ambulance service with subsidy option

The Chilton County E-911 Board voted on Aug. 26 to re-bid ambulance service with a subsidy option as the end of an agreement for countywide service gets closer.

Given the time that the bid information will need to be posted, the board hopes to vote in December on a new agreement.

The ambulance committee will work on a new request for proposals, including subsidy information, with plans to have it completed at its September meeting. Then, it has to be open for at least 30 days.

A recent vote by the Clanton City Council to negotiate a separate contract with RPS led Matt Griffin, chair of the ambulance committee, to question if Clanton would still support a countywide agreement, if local municipalities were asked to help pay for the service.

“We have got to work together,” Griffin said. “If we try to split off and do this as separate entities, it is going to wind up hurting someone somewhere in the long run.”

911 Director Terra Scott said RPS has already indicated it would not honor the original bid it had submitted, which remains unapproved.

911 Board Chairman Joseph Parnell said American Rescue Plan funding, federal COVID-19 pandemic funds, could likely be used for ambulance service, but now every county has opportunity to use these funds.

“So, we are not competing at any advantage by having money, because everybody has money now, too,” he said.

These funds are expected to be available for the next four years.

Derrick Wright of Chilton County EMA said it was important to know whether Clanton response numbers could be included in future plans and negotiations.

Clanton Fire Chief David Driver said the city anticipates spending $200,000 to have an RPS ambulance dedicated to Clanton. He voiced skepticism that the city would be willing to also contribute financially to a county plan.

“I don’t see where the city should have to do that,” Driver said.

However, Mayor Jeff Mims seemed to indicate financially contributing a smaller portion could be discussed in the future.

“We have been working together, but we are 14 months later, and nothing has changed,” Driver said.

He indicated that ambulance service issues were a “statewide problem.”

Numbers for a county agreement would still have to be adjusted in an agreement in light of this.

Previously, Clanton had thoroughly researched the possibility of establishing its own ambulance service with two ambulances. Driver said RPS would likely leave the county, hurting response for everyone else, if this happened, so the idea was abandoned.

“Eventually, we feel like we are going to have to do our own thing … a lot of fire departments are going that way,” Driver said.

Possible long-term solutions for the county, if this happened, and ways that dispatch protocol could be changed to help current response time were discussed.

Parnell said there are several Chilton County residents who have emergency services training, but are working in other counties. He said it would be good to come up with an analysis of what it would cost for the county to hire paramedics versus subsidizing a service for a long-term plan.

Griffin said the committee would work on this.

According to Parnell, St. Vincent’s had done an ambulance service study in the past that could be helpful.

“They picked it apart financially to the nth degree, and in the end without a subsidy, they walked away,” Parnell said. “This is a two-year-old internal discussion they had.”

Parnell said this would not be an immediate solution.

Establishing an ambulance service takes at least a year.

By ZACHARY SEIFTER/ Staff Writer   In 2019, the Chilton County Commission passed a resolution to add a 2% sales tax... read more