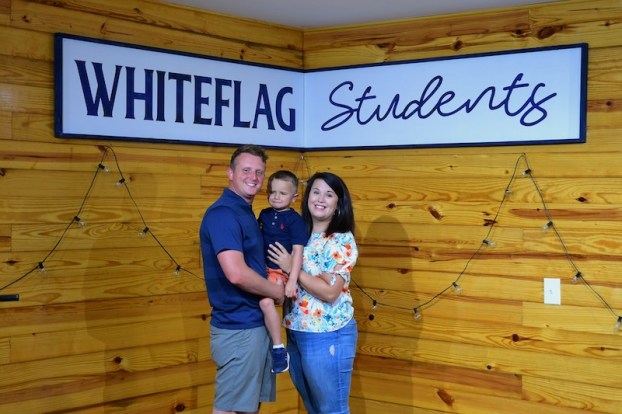 Justin, Bridget and Cooper Caton on the Whiteflag Building’s stage.

A decade of serving students in Thorsby

Editor’s note: This article was originally published in Faces and Places 2021. For a copy of the full magazine, stop by our office at 1109 Seventh St. N in Clanton,

Whiteflag Student Ministry at Thorsby First Baptist Church (TFBC) has seen significant growth over the past two years, and that is not by chance.

“Consistency, prioritizing the Word and fervent prayer is why God is allowing this ministry to grow,” Justin Caton said. “It’s definitely not because of me. That isn’t me trying to be humble or anything, I don’t believe I could do something like this without God’s help.”

To remain consistent at the peak of a pandemic was no small task, and it took some out of the box thinking to achieve it. The consistency came from the church allowing them to meet in-person again sooner than other places did, and the creation of the program Whiteflag Plus, Justin Caton said.

Bridget Caton, who is also a teacher at Thorsby High School, thought of Google Classroom.

“When we were talking about people learning in different stages it reminded me of Google Classroom at school,” Bridget Caton said. “You can’t start someone new in a discipleship group and expect them to be on the same level as the other students, so we came up with four different stages. Justin will come up with different ideas, and I will type them out for everyone.”

This became Whiteflag Plus, an online discipleship program distributed through Google Classroom. The program was such a success that the Alabama Baptist State Board of Missions has created a similar program based off of Whiteflag Plus, with help from the Catons.

Consistency as a youth group is also important in youth ministry. The Catons have served TFBC for nine and a half years now, which can be appealing to students whose lives are constantly changing.

Just simply seeing Justin and Bridget Caton still together can be a big deal to students, as well. Students that have a typical or complete family dynamic are becoming less common, and when they see the Catons together it can give them hope for their future families, Bridget Caton said.

“It is heartbreaking to know that an overwhelming number of people come from broken homes,” Bridget Caton said. “I came from a home similar to what these students have gone through, and maybe it’s giving them a little bit of hope to know they can come out of it, because I did.”

After consistency, studying the Bible is the Catons’ next focus. Justin Caton said students previously would have several different gospel presentations through out the week that might not be connected to one another, making it harder for them to learn about each topic.

“We have simplified our reading plans,” Justin Caton said. “It used to be like this; we would ask them to read in Colossians, then they might hear a message from Genesis in Sunday School, then one from Revelations in the Sunday service, and then I might do a message in Leviticus for midweek. How can you take all that in? So we simplified it, everything they read and hear is from the same scripture for that week.”

Justin Caton gave the example that if the scripture was on Ephesians chapter one, that the students would read it for themselves, hear sermons about it on Sunday and at midweek, there would be more content about the chapter on Whiteflag Plus and their discipleship groups would cover it that week as well. That way the students can gain a deep understanding of the scripture.

The Catons have also emphasized prayer in their and in the students lives. Both Justin and Bridget Caton have made prayer closets, similar to the movie “War Room,” where they have lists of people and things that they pray for throughout the week. During the school year, they also had a group of five to eight students come to their home at seven in the morning on Tuesdays before school to pray.

“Something you will hear us say around the church is, ‘Nothing of eternal significance will happen without fervent prayer,’” Justin Caton said. “So at 7 a.m. every Tuesday morning, we would invite students to our house to pray. There isn’t any breakfast, just coffee, and it’s a sacrifice for them, because they have to be there at seven. They will come and pray for their friends, their families, for revival in their generation and for God to use them in that revival.”

Another project the Catons have been working on is an after-school program called Open Door with Pastor Orlando Weeks of the Word Christian Center. During 2020, many after school programs closed down, and most of them are not free. Seeing this need, Weeks and Justin Caton started a free program every Tuesday afternoon from 3:30 to 5:30 p.m.

“Open Door has been really cool to see, and to be able to connect with different families,” Justin Caton said. “That is a desperate need in our community, and to see students go from failing reading to passing reading, or one student’s grandparents saying that they were better with their manners. That was a beautiful thing to see.”

The Catons are proud of how far Whiteflag Student Ministries, Open Door, Whiteflag Plus and their other projects have come, but their work is never done. They do not do these things for their own glory, but because they believe God has put them in their positions for a reason. Justin Caton said they will continue their work at TFBC for as long as God wants them the