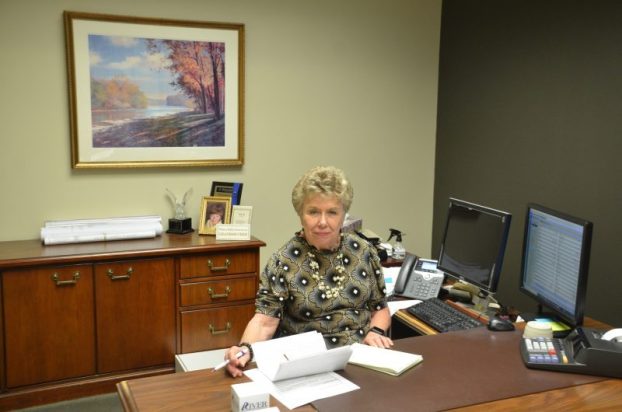 Ann Mims has worked in the banking industry for 60 years. She currently is a loan officer and the vice president of the River Bank and Trust location in Clanton. (ZACHARY SEIFTER/ ADVERTISER)

For some, it’s a lifetime. For Ann Mims, it’s the length of a career.

Mims has spent 60 years in the banking industry. She began her career at just 17 years old at the former Bank of Thorsby in 1961. She spent 14 years there before moving on in 1975. She went to Clanton, and has worked at what is now River Bank & Trust for 46 years.

“I enjoy being with people and enjoy helping people if I can,” Mims said. “It’s been a fun ride for me, I’ve enjoyed it.”

For most of Mims’ time, she has worked in the loan department. She currently serves as a loan officer and vice president of the Riverbank location in Clanton.

Helping others secure much-needed loans is very fulfilling for her, and that, along with making many friends and forming many new relationships, has been the best part of her career.

However, there have been challenges in Mims’s long career. The main one has been adjusting to constant changes in technology.

“When I first started there was an adding machine, and that was it,” Mims said. “The computers and all have been a challenge to us, particularly to me, but you learn as it changes, and it changes constantly.”

Despite those challenges, Mims would say that there have been more ups than downs in her career. All the positives that she enjoys in her job like helping people, making friends and forming new relationships have helped keep her from burning out after such a long time in the same job.

She does see a light at the end of the tunnel, however, and acknowledges that the sun is setting on her time in the banking industry.

“I’m getting ready to retire,” Mims said. “I need to, and I realize that. I’ve got a lot of things at home that I need to do and want to do … I see the end coming.”

Retirement will be difficult for Mims. She will miss the things that brought a smile to her face every day.

Whenever the end does come though, she will be able to look back and see six decades of dedication to helping the people in the Chilton County community.