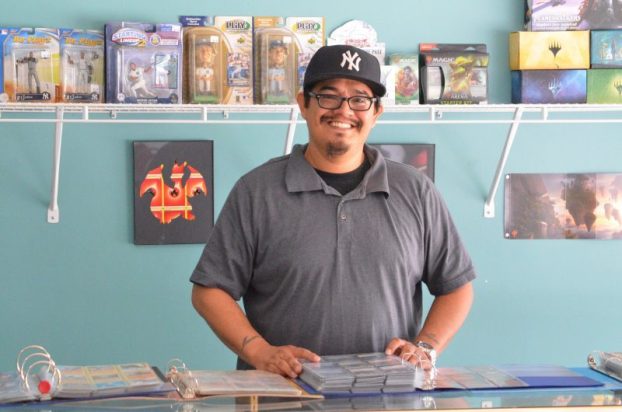 Card collectors of Chilton County, there is now a store for you.

Q’s House of Cards, a card and video game collector’s shop, has just opened up in Clanton.

Inside one will find thousands of cards ranging from baseball cards to Pokémon cards in addition to retro and modern video games and video game consoles, such as the Nintendo 64 or XBOX 360.

The shop was opened by Jose Quintanilla, a Chilton County native who has been collecting cards and games for over 30 years. Opening the shop and sharing his love for collecting with the people of Chilton County is something he has wanted to do for some time.

“My inspiration is just from growing up enjoying the hobby and just being able to bring it to the community,” Quintanilla said.

Over the amount of time that Quintanilla has been collecting, he has put together quite the inventory. He has a countless number of baseball, football and basketball cards, including some that feature great players like Mickey Mantle and Michael Jordan. He also has many cards that feature current players from their respective games such as Mookie Betts and David Price.

In the meantime, Quintanilla hopes for the community to come see what he has to offer, and he is excited to meet people that share the same passion for collecting as he does.

“Here at Q’s House of Cards, you’re not just a customer, you’re family,” Quintanilla said. “I want to hear your story, I want to hear how … you love collecting as well.”

Q’s House of Cards is located at 810 Seventh Street North in Clanton. The shop is open from 10 a.m. to 8 p.m. Tuesday through Thursday and from 10 a.m. to 10 p.m. on Fridays and Saturdays. For more information, go to their website https:// www.loc8nearme.com/alabama/clanton/qs-house-of-cards-collectibles-and-more/6162244/.