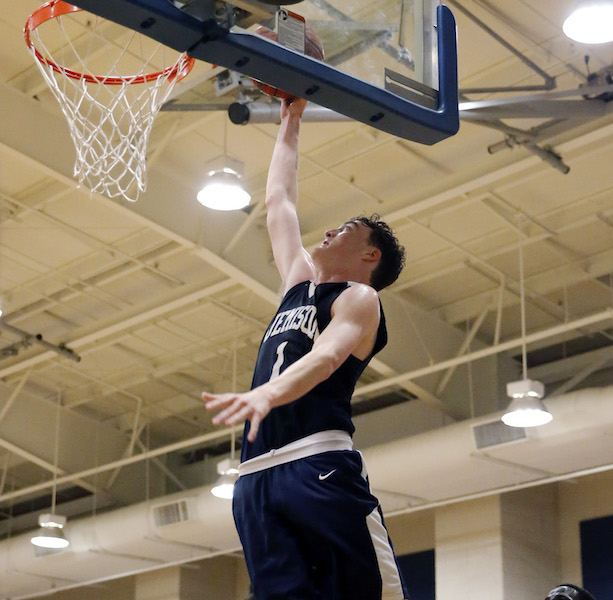 Jemison High School’s Nathan Johns had an outstanding 2020-2021 season. Johns averaged 27 points per game and 14 rebounds per game for the Panthers. (FILE)

Johns had an excellent 2020-2021 season for the Panthers, averaging 27 points per game and 14 rebounds per game. That was good enough to lead the county in scoring, while also helping Johns draw interest from different schools in the state.

The main reason for Johns’ stellar season and outstanding high school career is his dedication to getting better, even in the offseason. That drive to constantly improve is rooted in is his love for the game and how much joy he gets out of playing.

“My mindset with basketball is more than it being work in the offseason, it’s just fun,” Johns said. “It’s just fun to go outside and shoot around, work on my ball-handling, work on shooting, going out and playing some pick-up games or even when I was playing AAU … it’s just fun to me.”

While he has a lot of fun in the offseason playing basketball, Johns also makes a concerted effort to make himself better. He spent the last offseason improving his ball-handling skills and worked to make himself a more versatile player. Despite his 6 feet 6 inch frame, Johns’ versatility allowed him to be more than just a player that sat in the paint and made close-range shots. In fact, because of injuries to his teammates during the season, Johns was asked to do quite a lot because of his versatility.

“At the end of the year, he had to step up … he had to run point guard for us,” Jemison head coach Undra Rush said. “He ended up averaging 30-something points his last three or four games.”

As a senior, this was Johns’ last season at Jemison, but his play was good enough to score him an offer from Huntingdon College, where he will be playing next year. Playing college basketball has been a dream for a long time for Johns, one that he is thrilled to see becoming a reality.

“I’ve been playing basketball since I was about 4 years old,” Johns said. “In about middle school is when I realized that I was pretty good, and I set a goal for myself. I said ‘I want to play college basketball.’ I didn’t really care where it was going to be or how far I had to go … but I think my sophomore year I got picked up by an AAU team, and that’s when things started getting serious … Come my senior year, I made my decision, and it just felt good to achieve a goal that I’ve had for so long.”

That goal was achieved thanks to the incredible work ethic and drive that Johns has. It is what has carried him this far, and it is what will carry him even further in the future.

If the 2020-2021 basketball season is any indication as to what’s in store for Johns, he will have no trouble excelling at the next level.