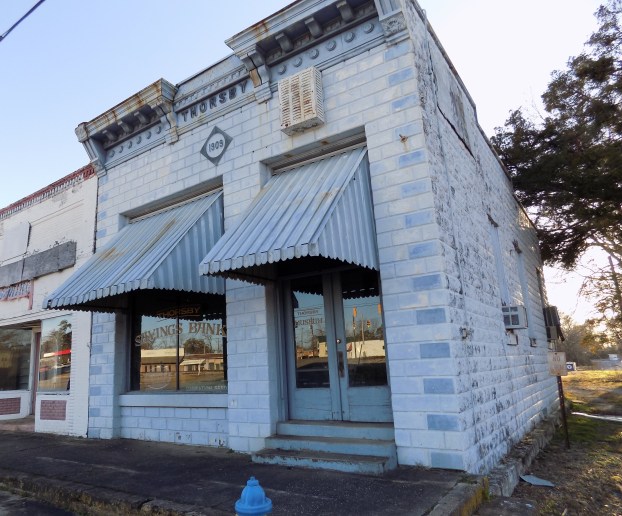 Committed to saving history in Thorsby

When driving through the sleepy town of Thorsby, you might have noticed the changes that have been happening to the old commercial buildings located just west of the railroad tracks. For generations, the old storefronts have been witness to changing times. Built during the peak of Thorsby’s town establishment, they have witnessed the horse and carriage be traded for the automobile, tourism vanish from U.S. Highway 31 with the invention of the interstate and countless trains go by. Several of the storefronts have now been demolished but one of the original stores still proudly stands. A beacon of Thorsby’s history. “Thorsby Museum” was originally built in 1909 as Thorsby Savings Bank. Because of the need for bank security, the structure was built from brick, instead of wood like the other storefronts. In 1914, a fire destroyed all of the stores except for the bank because of its brick structure. The bank, which still houses the original vault, was in service until the 1960s. After a few years of being used as a small business, Julia Wood purchased the building and donated it in 2012 to the Town of Thorsby to be used as a museum space. The museum has been an open learning center to the community looking to learn more about their heritage and background.

Glenn Littleton, who works as the museum curator gives tours and educates the public, especially during the town’s Swedish Heritage Festival in the fall. Students from the local school system have come on field trips and are able to learn more about Thorsby’s history and previous way of living.

“Ms. Jane Sutlive was the original curator and did so much work to preserve and label photographs,” said Littleton. “Most of the organization and museum credit is from her labor here.”

Over the years, local families have donated items that came from the same time period as Thorsby’s establishment and have importance in the town’s history.

“Some of the items that are housed in the museum are the original Swedish hymn books and Bibles that were used by the settlers, the original organ and prayer stool that were once housed in the Norwegian Lutheran church and the sign that originally hung on the train depot,” said Littleton. “We have a catalog of the old families that established and lived in the town from 1895-1918 and photos.”

Some of the items that were originally from the town have been donated from families that now live in other states and the items traveled back to Thorsby.

“The biggest benefit to having the museum is that there is a place to curate these items,” Littleton said. “The museum opens the opportunity to have items returned back to the town. When families are doing genealogy and come to Thorsby tracing their heritage, it is nice for them to come and visit.”

The museum is available for tours by appointment only. Contact the Town of Thorsby for appointment times at (205) 646-3575.

Impacting your government goes beyond casting a vote

By JOYANNA LOVE/ Managing Editor The great thing about living in a constitutional republic is that each person can have... read more