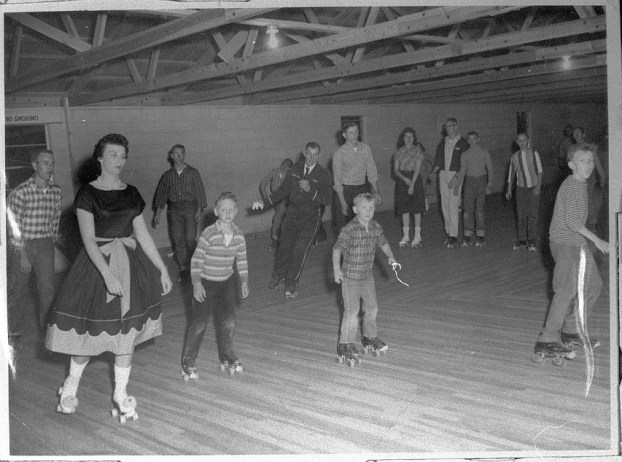 Unidentified skaters “skate on” at the opening of Clanton’s Skating Rink. (Contributed)

Vernon Scott and sons Percy and Douglas completed construction and opened the Clanton hang-out Jan. 11, 1961. There were other skating rink locations in Chilton County prior to the current location’s opening, including on Second Avenue in the former Klinner Furniture Store (across from the old Wadesonian Theater), and two other rinks located in Jemison and Maplesville. The previous location on Second Avenue was owned by the Thompson family and opened after World War II. It operated throughout the 1950’s. The current location at 2101 Pine Street gave locals a fun, new place to hang out in Clanton. Young adults would spend their weekends skating and going next door to “Bob’s Hamburgers.”

When Vernon Scott’s other son, Mickey returned home from the service in the 1970’s, he took over the family rink. Since then, other families have owned and operated the business including Buddy and Carolyn Cox and current owner Patricia Cleckley. It has been a community recreational area for decades, including during the skating craze of the 1970’s. Recently, the popularity of skating has been revived on social media platform Tiktok with teenagers skating to 70’s nostalgic artists such as KC & the Sunshine Band and Fleetwood Mac.

Since October 2020, the skating rink has been closed.  Front-line winds damaged part of the building. Current owner Patricia Cleckley has been waiting for insurance approval to repair the damage.

“The wind blew off the tin on the north side of the building and lifted the entire roof off a few inches and set it back down,” Cleckley said. “The building has been leaking ever since. Every time, it rains I empty buckets and try to keep it dry. The entire floor is beautiful old hardwood, and I don’t know how much more moisture the building will stand before I have to tear it down.”

Cleckley said if the building becomes irreparable, she will rebuild a bigger skating rink for the community.

“I started working here when the Cox family bought it in 1993,” said Cleckley. “I bought it from them in 2006, and it has allowed me to raise my family and spend time with my son when I needed to. It has been a dream job for me.”

Like many Clanton residents, Cleckley also attended the skating rink when she was an adolescent and has memories of when the rink would turn on the fans and open windows when skaters got too hot.

“It is heartbreaking to me right now to have it closed,” said Cleckley. “I want to fix it, but if I can’t I will build a new one that is better in the same location.”

OPINION: Thanks for a memorable five years

This is my last column as a member of the staff at The Clanton Advertiser, as my last day with... read more