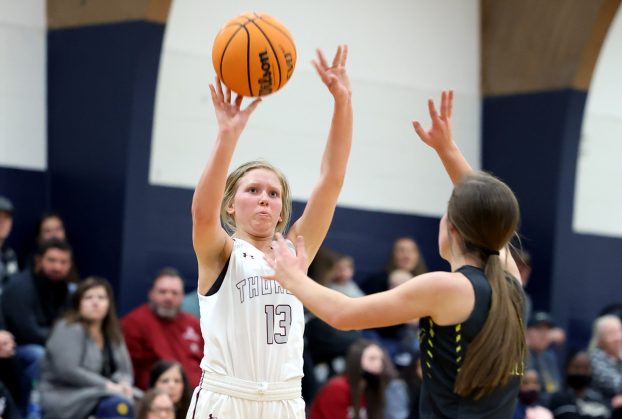 Cameron Lockhart led Thorsby with 18 points en route to a 56-41 semifinal victory over Isabella on Jan. 8. (Photo by Brandon Sumrall/Special)

With a 56-41 win over the Isabella Mustangs on Jan. 8, the Thorsby Lady Rebels advanced to the Championship round of this year’s county basketball tournament where they will face off with the Chilton County Tigers.

Despite the 15-point victory, the early moments of the contest were a nip and tuck affair as the Lady Mustangs would do well in making the win as difficult as possible for the Rebels.

Carlee Wyatt and Cameron Lockhart would combine to give Thorsby an early lead that would be cut to one thanks to baskets from Gracie Fjeldstad and Sadie Simon.

A three from Lindsey Wood and another basket from Wyatt would make it a six-point game, but a quick three from Anna Farris would cut the lead to three.

Deaisa Wilson would start the second quarter with a three for the Mustangs, while a three from Lexi Higgins would later knot the game at 18-all.

Two from the line by Simon would give Isabella their first lead of the night, but would be ended quickly on a three from Lockhart. 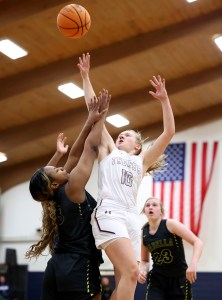 Carlee Wyatt and the Rebels secured a spot in the county championship game with the win. (Photo by Brandon Sumrall/Special)

An old-fashioned three point play by Simon would once again give Isabella the lead, but in a case of deja vu, a three from Lockhart would again put Thorsby out in front.

With the addition of a pair from the line by Lockhart, the Rebels would end the first half with a 28-24 lead over the Mustangs.

The Rebel lead would grow to eight during the early moments of the third thanks to four-straight from Wyatt, while another three from Lockhart would later make it a nine-point Thorsby lead.

Amberly Davenport and Carrie Farris would combine to push the margin to 13, but it would be followed with a basket from Logan that would make it a 41-30 ball game as action moved to the final period of play.

Amelia Fjeldstad would make it a 10-point game with a three for the Mustangs to start the fourth, while Wood and Wyatt would team up to put Thorsby on top by 14.

Davenport would make it a 15-point game with 4:07 to play and with the Mustangs unable to cut in to the Rebel lead, Thorsby would go on to a 56-41 victory while securing a spot in tomorrow’s championship bout with the Chilton County Tigers.

Lockhart led the Rebels with 18 points, nine rebounds and a pair of steals, while Amelia Fjeldstad led the Mustangs with 16 points, six rebounds and a steal.

Pressure defense and ball movement offensively were the keys to success during Thorsby’s 78-53 semifinal win over Maplesville in the... read more