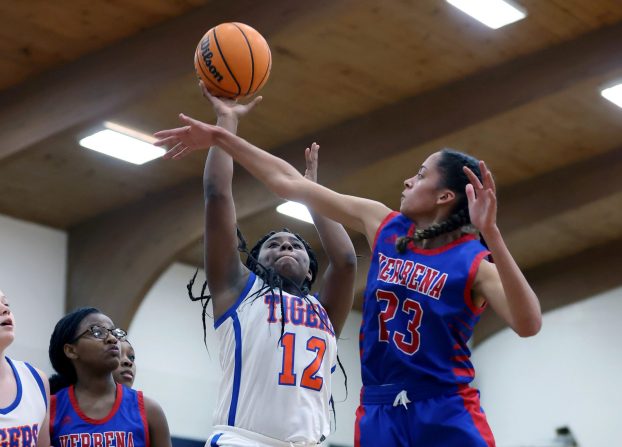 The Chilton County Lady Tigers would be forced to overcome a slow start on Jan. 7, but a hot second period aided in propelling the Tigers to a 57-37 victory over the Verbena Red Devils in the Semi-Finals of this year’s County Basketball Tournament.

Verbena would prove to have the hot hand during the first period as Jasmyn White and Macey Kelley would combine for a pair from downtown to put the Red Devils up early, 6-0. Tyeshia Williams would put the Tiger on the board but would be answered with another three from Cheyann Barchard. A basket from Marlie Giles along with one from the line for Saniya Underwood would go along with another Verbena three from Natalie Easterling to make it a 12-5 Red Devil lead after one period of play.

The second period would see the addition of Iasia Anderson to the Chilton lineup as the Tigers leading scorer would come off the bench and would get started with a basket from downtown. Another basket from Anderson along with one from Williams and another from Giles would give the Tigers their first lead of the night at the 5:09 mark of the second. Nine points by Anderson and five from Williams on the period would lead Chilton in outscoring the Red Devils 26-6 on the period and would send the Tigers to the locker room with a 29-18 lead. 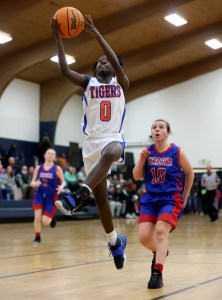 Chilton County’s Iasia Anderson drives to the hoop for a layup. (Photo by Brandon Sumrall/Special)

The Tigers would keep their momentum going during the early minutes of the third as a three from Anderson would start a 10-0 Chilton run that would eventually end on a free throw from Kelley but not before the Chilton lead had grown to twenty-one. The Tigers lead would grow to twenty-two before a rain of threes from White and Dakota Adams would aid in cutting the lead to twelve as action moved to the fourth with Chilton holding a 41-29 lead.

Tyonna Booker would make it a fourteen point game early in the fourth while an old fashioned three from Giles would push the Tigers out in front by seventeen. Late baskets by Natalie Easterling and White would cut into the Tiger lead, but a basket from Williams as well as a buzzer beating three by Ishunti Brown would seal a 57-37 victory for the Tigers.

Chilton County will face the winner of tomorrow evenings Isabella vs Maplesville matchup in Saturday’s Varsity Girls County Tournament Championship game with tip off set for 2:00 at Jemison High School