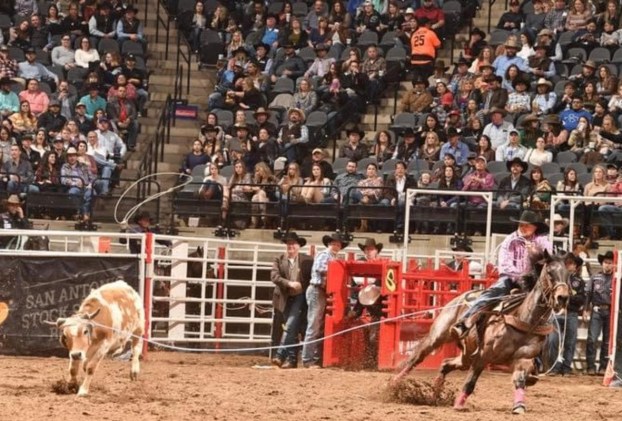 Cowboys and roping cattle may be reminiscent of the television series “Bonanza,” but there are still cowboys on the range among us.

Clanton resident Nelson Wyatt spends his time on the road roping cattle and is a professional “cattle header.” Cattle headers rope the head of steers, while their roping partner ropes the back legs.

Wyatt, age 27, recently placed fourth at the Wrangler’s National Rodeo competition in Arlington, Texas. The event is a 10-day competition in which a winner is declared each night. At the end of the competition, wranglers are graded on their time and by their yearly national average of wins. The top national prize is valued at $187,000. Wyatt placement at fourth in the nation roped the prize of $166,000.

Wyatt’s interest in being a wrangler started at the age of 5 when his father taught him how to rope. He started participating in events at age 8 and joined the junior league. He wrangled in college and became a professional wrangler in 2017.

“I love the competitions because you are competing with the best in the world,” said Wyatt. “I also love to travel and see the different cities that we compete in.”

Wyatt and his competition horses (which are separate from the horses he practices on), travel in a horse trailer across the country from Washington State to Florida. At the rodeo venue, there are stables available for Wyatt to house his horses. Wyatt’s horse trailer has a separate area similar to a camper that he rooms in during the competition. They travel on the road to competitions from January to October, with summer emphasized as their main competition time.

“We compete in about three rodeos per week during the summer,” said Wyatt. “The week of July 4, we compete in 10 rodeos that week alone.”

Wyatt is already looking forward to next year’s competitions. The venue for the national finals is set for Las Vegas, Nevada.

“I am going to rodeo for as long as I can,” said Wyatt. “Hopefully, this year I will make the finals again and win.”

Nelson is the son of Allen and Aleta Wyatt of Clanton.

Rivalries have fueled sports over the years, and it is often these times that captivate even the most casual of... read more