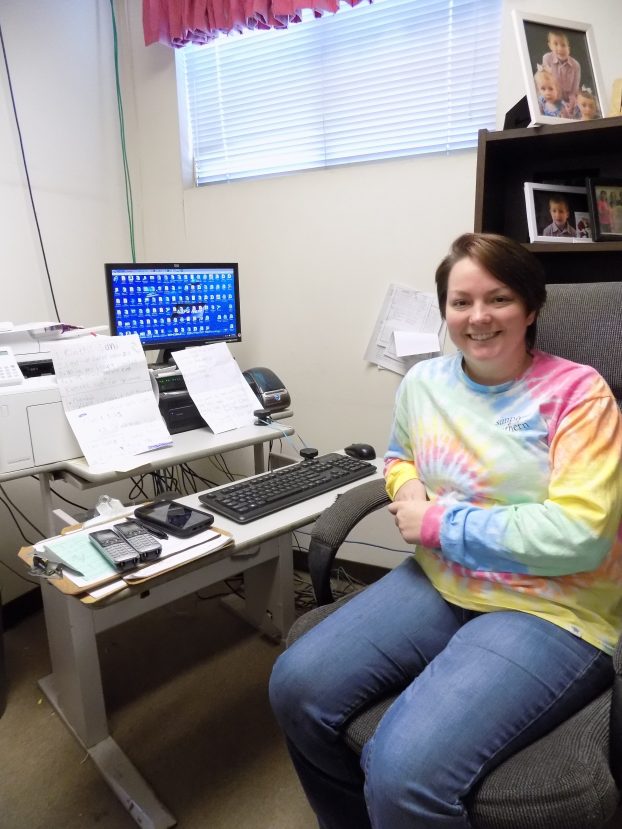 Thorsby Post Office employees Candace Johnson and Wanda Culver are Santa’s helpers. They help Santa respond to the many people that write in each year. Johnson is pictured reviewing two of the special letters Santa received this week. (ELISABETH SMITH/CONTRIBUTED)

Writing Santa allows children to express their heart’s Christmas desire but can also be a magical outlet for adults. Most all of the letters that flow through the mail system are addressed to the “North Pole” or zip code “99999”, and by the miracle of Christmas magic and love an amazing network of Santa’s helpers really do exist and help Santa respond to the many people that write in.

Thorsby Post Office has a special “For Santa” mailbox that allows mailers to leave a letter for Santa. “To Santa” letters are also mailed in. Once the letters are received, Santa sends a letter back addressing their Christmas wishes, and if they have been in good character this year. Santa’s mailbox receives 30-40 Santa letters each week.

Thorsby clerk Candace Johnson is one of Santa’s helpers and has helped sort Santa’s letters this week.

“Kaylee and Hallie” both wrote in and asked for a light-up super salon spa, an all in one beauty compact, Play-Doh, and a Scribble Scrubbie Pet Grooming Truck. Other children’s requests include a real race horse, a Michael Myers costume and a Schleich barn with animals.

“A 4-year-old requested a new iPhone 12, and another child asked for a real reindeer and living elves, but included, ‘please deliver them to my sister’s house. Do not bring them here to my house,” said Johnson.

Thorsby Postmaster Wanda Culver has been helping Santa for six years and does it because she loves seeing children get excited during Christmas.

Both Johnson and Culver have children of their own and know how exciting it is when Santa writes back, and they receive something in the mailbox with their name on it. However, sometimes they receive letters from adults or teenagers asking for heartfelt things at Christmas.

“It is therapeutic to write Santa,” said Culver. “One year a woman who had just lost her husband asked Santa for his prayers during the Christmas season.”

Santa letters can also be humbling. Some children haven’t requested anything and only ask for presents for their sibling, adding that their brother or sister has been good this year.

“A few years ago, a teenage girl asked Santa if he could make her parents stop fighting and to please bring more food to their house,” Johnson said.

Other post offices from around the county have special Santa helpers that collect letters and send them to Birmingham, which are then collected and uploaded to an online network called “Operation Santa” which allows Santa and his helpers to read letters from all over the United States. Individuals that would like to “adopt a letter” and purchase gift items for children, may read letters online and select the letter that appeals to them most.  For more information on Operation Santa, visit www.uspsoperationsanta.com.

Over the hills we go

By Elisabeth Altamirano-Smith/ Community Columnist Driving horse-drawn carriages during December is nostalgic and has been embedded in Christmas Americana since... read more