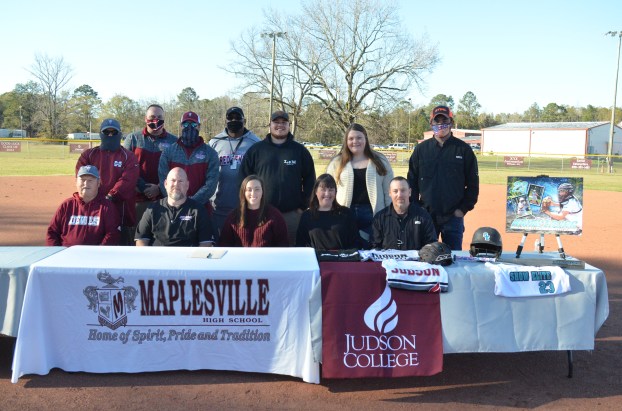 Jaycie Armstrong’s softball IQ is one of the primary reasons head coach Tom Hannah wanted her to play softball at Judson College in Marion.

“She comes from a not only a good high school background, but a good travel ball organization,” Hannah said. “She’s been coached well at both places. I liked what I saw, and we were happy to get her.”

Armstrong made it official by putting pen to paper during a signing ceremony on the infield of the Maplesville High School softball field on Dec. 2.

“It felt good to wake up this morning and be here today,” Armstrong said. “I’ve always wanted a signing day, and now it’s finally happening.”

According to Armstrong, there was so much that she loved about Judson that led her to choosing the school.

“It’s right up there with my beliefs, being a Christian school, and it’s a small school so you really feel like they’ll care about individual people,” Armstrong said. 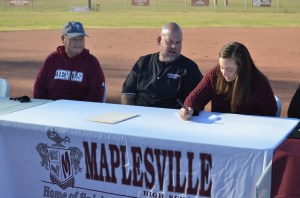 Armstrong will be expected to primarily play catcher at the college level. (Photo by Anthony Richards)

Hannah hopes to use Armstrong primarily as a catcher at Judson.

As a result, Armstrong has really begun to dial her focus on improving behind the plate in recent months.

It has been an adjustment since she played more fielding roles growing up.

However, Armstrong is embracing the challenge and believes that she will continue to develop with the more reps she gets.

“A lot of people think as a catcher you just catch the ball, but there’s a lot more to it than that,” Armstrong said. “You’ve got to see the field and really help the other girls out.”

“She’s got a knowledge of the game to go along with her athletic ability,” Hannah said. “Your catchers end up being your leaders, and we really want to see her work her way into that role for us.”

Basketball season has begun for many schools in the county, but the same COVID-related issues that caused postponements during the... read more