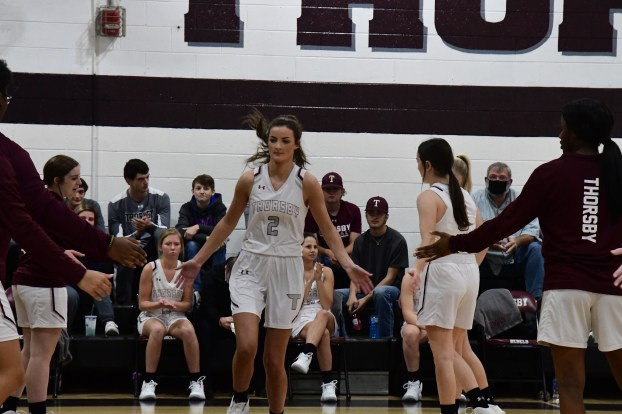 Thorsby’s Emily Jones takes the court prior to the Rebels home opener on Nov. 17. (Photo by Anthony Richards)

OPINION: Basketball is back

High school sports go through a couple of transitions each year, and we are in the midst of one right now.

As Isabella and Maplesville still compete in the football playoffs, the rest of the schools around the county have begun to switch their attention to basketball.

I can’t wait to fully dive into this basketball season, as so many boys and girls teams have high expectations, not just from people who watch and cover them, but also by those who occupy the sideline and actually play the games.

There are so many interesting story lines entering the season that I am looking forward to seeing how they pan out.

Can Thorsby’s boys and girls teams repeat as county champs? In the case of the boys, it would actually be a three-peat.

The CCHS girls have already shown what they may be capable of with a monstrous win over 7A Thompson. Now, it is up to the CCHS boys to keep pace with their school counterparts.

Jemison and Maplesville each have tremendous scorers on their teams with Nathan Johns and Jackson Abbott respectively. They join Sawyer Sellers of Thorsby as favorites to be named The Clanton Advertiser’s Boys Player of the Year at season’s end.

On the girls side of things, Carlee Wyatt of Thorsby, Jasmyn White of Verbena and Iasia Anderson of CCHS are among the contenders for player of the year.

A dark horse player of the year candidate could arise from the Isabella girls squad, which was full of young talent a year ago.

Each of those players are sure to put on a show and fill up the stat sheet each time they hit the floor.

I encourage anyone, no matter what school you root for, to make the time in your schedule to watch these talented athletes, because they have the ability to play the game of basketball at such a high level that it looks like a form of art.

Finally, in the private school ranks, I look forward to seeing if the boys and girls teams at Chilton Christian Academy can continue their strong program traditions of making deep postseason runs of their own.

However, the season turns out for our local teams, one thing for sure is that basketball is back, and it is going to be a fun ride!