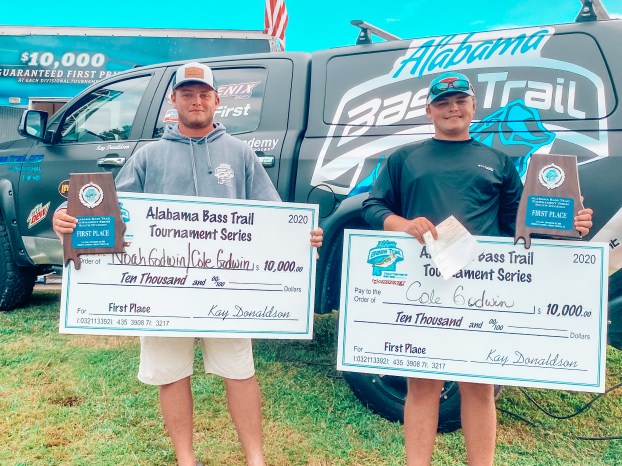 Cole and Noah Godwin earned $20,000 after a pair of Alabama Bass Trail Tournament Series wins during the 2020 season. (Contributed photo)

Noah and Cole Godwin have always had a brotherly bond when it comes to fishing, and they are quickly becoming names to know among professional fishermen in Alabama.

The brothers combined for a pair of tournament victories on the Alabama Bass Trail Tournament Series.

They earned a $10,000 winning purse on both occasions, which is a vast improvement from last season when they did not cut a single check.

It was their second year competing at that level, and Noah Godwin believes they learned a lot from the bumpy road they endured their rookie season.

They hope to return next season with the goal of improving even further, which would include climbing more spots up the rankings and having a shot at being named Angler of the Year.

The 2021 season is scheduled to begin in February.

Noah, 20, and Cole, 18, both live in Clanton, and Cole attends Billingsley High School. Growing up in Clanton allowed them to learn the tricks of the trade of fishing over the years on the Coosa River.

“We’ve been fishing with our dad for as long as I can remember,” Noah Godwin said. “We’ve always fished local tournaments, but decided to step it up to the ABT last year.”

The difference in competition at the local level compared to statewide was eye-opening for both of them and something that took time to adapt to.

However, that switch flipped to the on position this year, and the success followed suit. 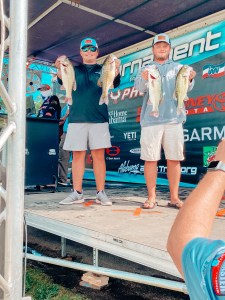 It was the second season that the Godwin brothers competed on the ABT circuit. (Contributed photo)

One of the changes they made this year was making sure they don’t spend their time looking for the perfect spot to fish and instead work with the initial spot they found.

“We tried to fish a lot of places (during a tournament) last year,” Noah Godwin said. “We learned the hard way that that is not what you want to do.”

According to Godwin, every time they left a spot in search for somewhere better, they instead found that others already occupied the good fishing spots, and by the time they came back to their previous fishing hole, it had been taken by someone else.

“This year, we would find our spot that had fish and just stay there all day,” Noah Godwin said.

Both events were won in similar fashion, as they caught the eventual winning fish early in the day and had to wait for hours as others came through weigh-in with their hopefuls.

Their first victory came at Lake Jordan on February 29 with a winning weight of 20 pounds, 33 ounces.

Watching the other fishermen bring up their catches one after the other was a nerve-racking experience for the brothers.

“We stayed for about two hours watching everybody weigh in,” Noah Godwin said. “It felt real good, because we didn’t expect to win it, because we just didn’t think we had enough to hold up.”

Their second win came at Lay Lake against 224 other boats.

“They were both special, but that first time definitely meant a lot more,” Noah Godwin said.

The money they earned from the tournaments has been used to upgrade their boat from a 2001 model to a 2014.

The brothers have high hopes to one day get to the point where they can consistently make enough money to make fishing their full-time career.

Chilton County is about to enter Phase II of its most recent paving project following a resolution approved unanimously by... read more