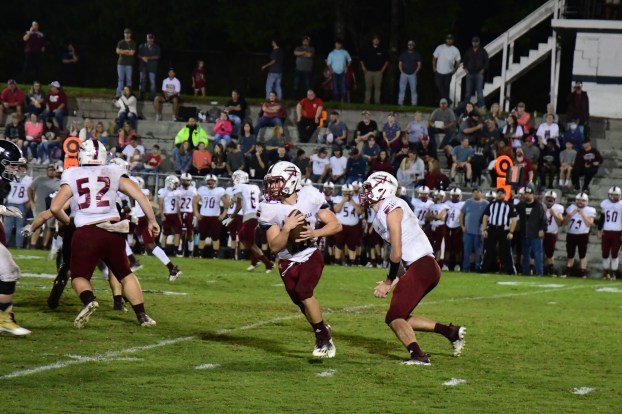 Brady Harrison receives a handoff from Jackson Abbott. Harrison scored the game-winning touchdown for Maplesville in overtime against Notasulga on Oct. 9. (File photo)

The Maplesville Red Devils clamped down on its control of the Region 4-1A standings with a 27-21 overtime road victory against Notasulga on Oct. 9.

Brady Harrison punctuated the rainy night’s scoring with a touchdown run in overtime, which proved to be the game winner after the MHS defense prevented Notasulga from responding with a score of their own.

The wet playing conditions put a larger emphasis on the ground game for Maplesville’s offense, and Harrison led the way with 156 yards and two touchdowns on 31 carries.

Due to the usually well-balanced MHS attack being forced to play one-sided, starting quarterback Jackson Abbott made the effective transition from passer to runner, as he ran 23 times for 103 yards and two scores.

Both Harrison and Abbott routinely followed the blocks from their offensive line to the tune of an average of more than four yards per carry.

Maplesville’s front seven on defense did its part throughout the game to limit the production of Notasulga’s running game.

Footing on a wet field can be an issue, but that did not stop tackling connoisseurs Brandon Pickle, Taylor Sheffield, Timber Lenoir and Harrison from doing their job.

Together the group finished with 24 tackles on the night, led by Pickle’s seven.

Lenoir’s season sack tally improved to 3.5 as he got to the opposing quarterback once during the contest.

Abbott only attempted three passes on the night, all three fell incomplete.

However, he did convert three extra points in the slippery conditions.

With the overtime victory, Maplesville improved to a record of 6-1 overall and 4-0 in region play.

The Red Devils now sit solely in first place in the region standings with only home games against Verbena and Autaugaville remaining on the region schedule.