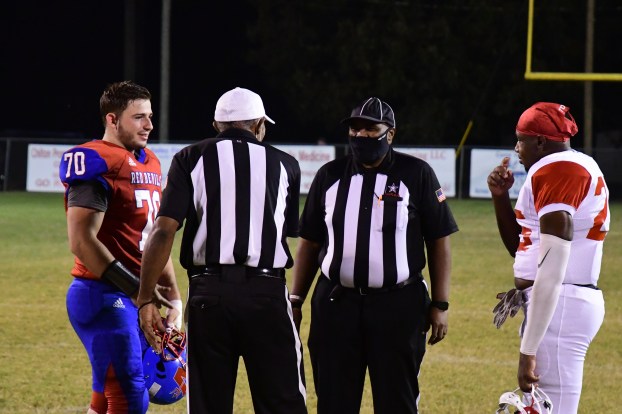 It is important for players to roll with the bad calls by referees and get on with the next play. (Photo by Anthony Richards)

I have covered my share of sporting events over the years, many of them at the high school level where the referees can be a bit spotty at times to say the least.

However, this is not a column about how horrible referees are. I actually respect the majority of them a great deal and often times stand on the sideline thinking “I wouldn’t want to have to make that close call.”

No, instead this is a story about the relationship between players and referees.

If you think refs missing calls throughout a game is bad, then you must really get upset with the constant hands raised and bewildered facial expressions that players immediately go for almost every time they drop a ball, miss a layup or get called out looking at home plate.

I know I was not quite this wise when I was in high school, but I have always tried to have a respect for the refs even when that respect would run thin.

Really, I just never saw the point in arguing with the ref because the call was already made, and I have never once seen a ref change his mind after a player stated their displeasure with his initial call.

It really is a waste of time and if anything, actually probably creates more of a negative relationship between you and the ref that could come back and bite you eventually.

Another thing I have seen more often than I would have liked to is when players get so consumed with the refs and their calls that their own game begins to suffer because they have shifted their mental focus to those in the striped uniforms and not on the game at hand.

A mix up of one’s priorities like that could cost your team the game one day.

I have taken mental notes over the years and learned what not to do from oh so many, that I have a great idea of how I will approach this with my children one day when they play sports.

The main thing is to make sure they understand that refs make mistakes, and just like players miss shots refs will miss calls.

It is just a part of life, so we have to the best we can with what we have.

How a player handles a ref’s missed call could be how handles adversity through life. For me, brushing it off and getting to the next play always worked out.

Also, it is important to never forget that you’re not the only team on the field or court that are impacted by a referee’s missed calls. Because of this, they usually even out as the game moves along and often times it is pretty much a wash in the end.

VHS shut out after late start

The Verbena Red Devils struggled to hang with region foe Loachapoka and lost 42-0 at home on Oct. 8. It... read more