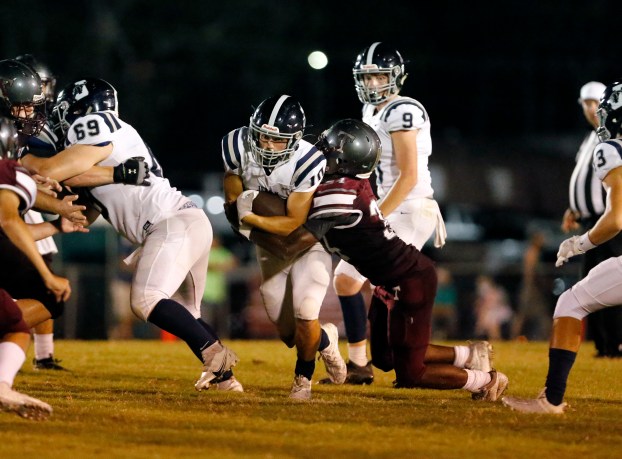 Hunter Baker has been a consistent contributor to the Jemison rushing attack in the early part of the season. (File photo)

JHS unable to finish off win against Marbury

The Jemison Panthers lost 18-13 in a heartbreaker on the road to the Marbury Bulldogs on Sept. 11.

It is a game that will sting for a while after the Panthers had a 13-12 lead and the ball with about 5 minutes left in the game but were unable to close the deal.

Jemison turned the ball over with a fumble on the drive and suddenly it was Marbury who had possession with a chance to go down and win.

The Bulldogs were able to capitalize on the turnover and grabbed the lead with a late touchdown that proved to be the game-winner.

Wright also led the team with 73 rushing yards on 10 carries, while Hunter Baker chipped in 51 yards on the ground.

The Panthers put forth a stingy defensive effort that was led by Ryan Harris’s 12 tackles, two of which were tackles for a loss.

Jemison forced a pair of turnovers on the night with Josh Gilliland intercepting a pass, and Luke Mitchell recovering a fumble.

Gilliland showcased his versatility during the contest by finishing with 10 tackles, as well as running for a touchdown on offense and breaking loose for a 44-yard kickoff return.

Next up for Jemison is another region road date, this time against Sipsey Valley on Sept. 18.

The pandemic has led to a very awkward spring and summer for sports fans, with many of the signature events... read more