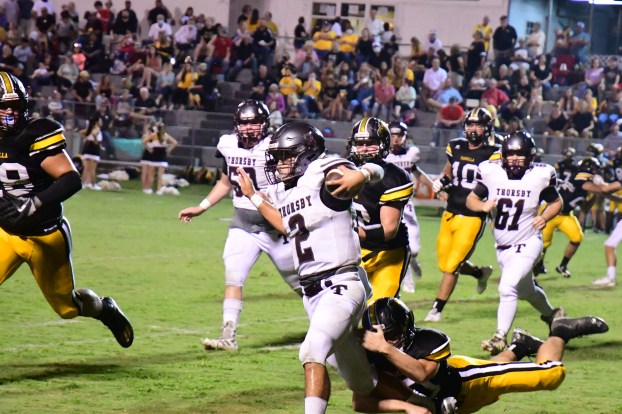 Thorsby’s Brody Barnett is corralled from behind by Isabella’s Reid Mitchell during a game on Sept. 11. (Photo by Anthony Richards)

The Isabella Mustangs played their most complete game of the season en route to a 40-8 trouncing of rival Thorsby on Sept. 11.

The game carried even more importance because it was the region opener for both teams, and in the case of Isabella provided them with momentum heading forward, while the Rebels head back to the drawing board in search of answers.

Isabella’s defense was a bright spot from the beginning and stymied Thorsby’s production with relentless pressure and pursuit of the ball.

Providing pressure was a major part of Mustangs’ game plan heading in and they were able to have success doing just that. 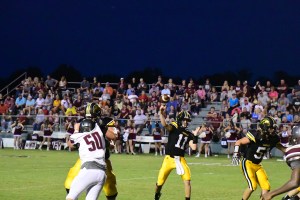 Jake Logan fires a pass in the pocket. He threw three touchdowns on the night. (Photo by Anthony Richards)

“We had a game plan where we had double ends on most plays with blitzing coming off the edge,” Isabella defensive end Reid Mitchell said. “The mindset was to hold them to zero.”

Isabella came oh so close to accomplishing that lofty goal, if not for a late touchdown drive surrendered by the second-team defense with 22 seconds remaining.

Before that, the second-team defense had held its own for much of the fourth quarter, as the starters urged them on from the sideline.

“All of our (first team) linemen had at least one sack, and most of them had two,” Mitchell said with a big grin on his face.

Mitchell’s speed off the edge was difficult for Thorsby to handle all game and it was coupled by the ferocious nature of fellow defensive linemen Anthony Fjeldstad and Kaleb Brasher.

Offensively, Isabella demonstrated the ability to consistently move the ball and took some shots through the air to coincide with its powerful rushing attack. 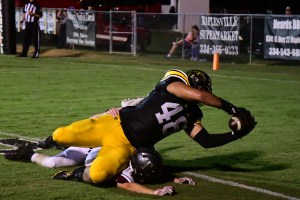 Anthony Fjeldstad of Isabella stretches a ball over the goal line for a successful two-point conversion. (Photo by Anthony Richards)

Jake Logan was on target all night long and threw three scoring strikes in the contest, two of which came in the first half to Zac Chapman and Austin Jones to help give the Mustangs a comfortable 21-0 lead at halftime.

The Mustangs had the advantage on special teams and were able to pounce on consecutive kickoffs in the second quarter.

Isabella went down the field and scored on its first offensive possession of the second half just as it did to open the game. This time, It was Logan finding Braxden Giles for his third touchdown toss.

J.J. Wilson broke a run off left tackle and turned on the afterburners following a lead block by Falcon Fowler on his way to the end zone to extend the Mustangs lead to 34-0 and they added one more rushing touchdown for good measure in the final quarter.