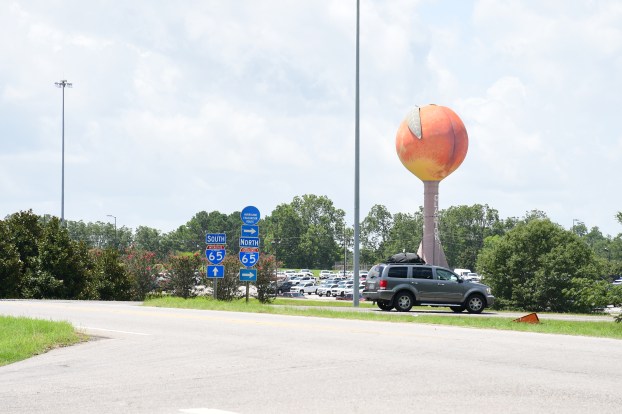 Exit 212 will look much different 20 years from now if the vision of the master plan comes to fruition. (Photo by Anthony Richards)

A draft of the 2020 master plan for Interstate 65, Exit 212 in Clanton in conjunction with the Alabama Farm Center at ALFA Centennial Park was unveiled during a presentation July 29.

It was a highly-anticipated unveiling and was something that had been in the works for the past year.

The process started with a trio of stakeholder meetings in July 2019 held at the Alabama Power building that included more than 300 residents interested in the project at hand.

The opinions shared in those public forums combined with months of research and data gathering pertaining to the land around Exit 212 led to the final draft of the master plan.

The plan laid out on July 29 was essentially a conceptual vision for Exit 212 that includes multiple phases over the next 20 years.

Potential opportunities that were listed as future possibilities to target included attracting more fishing tournaments, restaurants and a movie theater, advancements in workforce development, introduction of a strawberry festival and construction of an outdoor amphitheater.

The plan included many conceptual designs, one of which included various “villages” that fed into each other or were adjacent to one another and the farm center.

Some of the concepts revolved around the future development plans for a mix of residential, retail and recreational areas.

Because the plans are still conceptual at this point, it means nothing mentioned during the draft unveiling is concrete but it serves as a checklist to keep track of goals pursued in the future.

According to Gregory, it was important throughout the planning process to maintain Chilton County’s natural beauty and characteristics along with any future development that takes place.

Due to the plan looking out five to 20 years down the road, it will remain fluid as things, such as economic standing, change over time and cause the plan and the direction to adjust with it.

The hope with the development is to further connect downtown Clanton with the growth at Exit 212.

The master plan was presented as a draft because it still has to go through the final approval of the local governments.

“Mayor (Billy Joe) Driver was very interested in this,” Clanton Mayor Bobby Cook said. “This is more than just a place out over on [Highway] 145. It is going to be huge for the city, and I am ecstatic about it.”

According to Commission Chairman Joseph Parnell, the vision focuses on growing with the future in mind, while preserving the small-town atmosphere that makes Chilton County unique.

Parnell stated that an estimated $15 million of additional tax revenue is expected per year to be collected once the farm center is up and running and the area around it is built up.

Of the estimated $15 million, about $4 million of that additional revenue will go to the county to help with anything from roads to the county school system.

“I hope that you get as excited about it as we are,” said Parnell, with a big smile on his face.

According to Barlow, there are 1.3 million people living within an hour drive from Clanton.

Barlow expressed that the best thing is that the people coming and spending their money will be tourists and will therefore leave once their designated event they came for is over. However, before they leave, they will help create revenue that will ensure the possibility for better lives for the people that do call Chilton County home the rest of the year.

According to Barlow, the biggest employment opportunities will not come from the farm center itself, but the commercial development that pops up around it at the Exit 212 area.

“As the private sector grows, the less the local governments will have to put into it,” Barlow said. “The payoff is going to be worth it in the end.”

For the first time in 15 years, the Alabama Career Center System will have a facility in Chilton County. It... read more