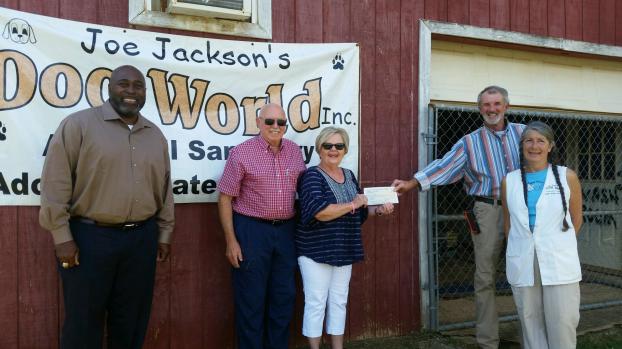 The Chilton County United Way does not just strive to help the people in the community, but also the animals that call it home.

The organization donated $1,000 to Joe Jackson’s Dog World, Inc. in Jemison during a check presentation on July 22.

Joe Jackson’s Dog World, Inc. is a nonprofit rescue and no-kill sanctuary for dogs looking for a home.

CCUW also donated another check for $1,500 that was designated to help cover the shots and other medical expenses the dogs require from Cox Veterinary Hospital in Clanton, which the sanctuary works closely with.

The sanctuary currently has 42 dogs, three of which require routine medicine.

According to Jackson, the sanctuary has more than the optimal number of dogs at the moment.

“It would be nice to get some of them adopted,” Jackson said.

Joe and Jeanne Jackson began the sanctuary in July 2011, and the shelter focuses solely on the rescue of dogs and no other types of animals.

The dogs are primarily medium to large in size. 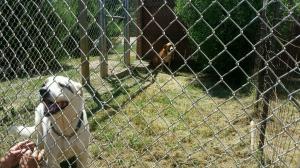 According to Jeanne Jackson, being a sanctuary allows the older dogs they take in to live out the rest of their lives on location if they do not get adopted.

However, due to Joe and Jeanne having to run the sanctuary on their own, they try to not take in more dogs than they can handle. This means certain rules exist.

“We don’t take in stray dogs,” Jeanne Jackson said. “They have to be fully veted.”

This means before taking in a dog they have to be spade or neutered and have up to-to-date shots.

Those rules are something the Jacksons had to put in place in order to best protect the dogs that they currently oversee.

Prospective adoptions are scheduled by appointment only and the best way of going about setting up one is by visiting Joe Jackson’s Dog World Facebook page or emailing jjdogworld@gmail.com.

Prior to setting up an appointment to look at a dog, people can look at pictures and read about the dogs on petfinder.com by typing in “Joe Jackson’s Dog World, Inc.” in the search box.

Broadband in Chilton County has been lagging behind, but the winds of change appear to be rustling with a feasibility... read more