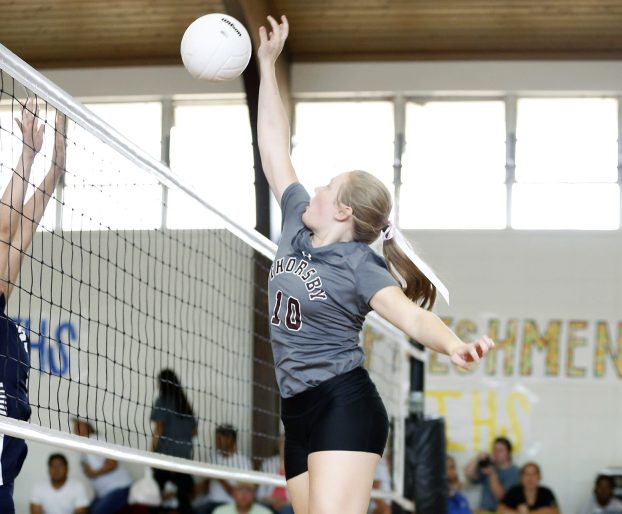 Thorsby volleyball has ordered a new net for the upcoming season that begins in August. (File photo)

THS to get much-needed volleyball net

To play volleyball you need a net, and the Thorsby Rebels currently do not have one.

However, that is about to change following the program’s purchase of a new net system.

Thorsby head coach Hollie Brown expects the new net to be delivered and ready to go by the start of the season in August.

That will be a welcome sight for Thorsby’s players, who have practiced without a net for the past several weeks.

According to Brown, the net the Rebels had been using was about 15 years old and had gone through its share of problems over the years before finally reaching the point of unrepair.

Unlike many net apparatuses that have poles on each side that stick into the holes cut into the gym floor to hold in place, the Thorsby gym requires the net to be braced above the court due to a lower level underneath.

Instead, anchors are placed on the floor with bolts that can be screwed to tightened or loosen.

After years of use, the screws had been bent and were no longer reliable at holding the nets in place.

Throughout last season, the Rebels had to place 70-pound weights on each side of the nets to help hold it in place.

“It really was a need, and no longer just a want,” Brown said. “It got to the point where it had become a safety issue.”

The system cost a little more than $3,000 with shipping and handling fees included.

Although the net has already been purchased, Brown and the team created an account at gofundme.com in an attempt to raise $2,500.

The account was created in hopes of recuperating some of the expense that it took to get the net.

Due to the net being purchased, Thorsby’s volleyball budget is lower than it had been with the team still having to pay the routine expenses that come with operating a program, such as equipment and officials’ fees.

Anyone wanting to donate money toward the cause can go to gofundme.com and search Thorsby Volleyball or donations can be given through other means by contacting Brown at hnbrown@chiltonboe.com for more details.

“There have been people that don’t even have a connection to anybody on the team, but they just want to give back to the community,” Brown said. “That’s pretty awesome.”

By JOYANNA LOVE/ Managing Editor The Chilton County E911 Board and Regional Paramedical Services have signed a memorandum of understanding.... read more