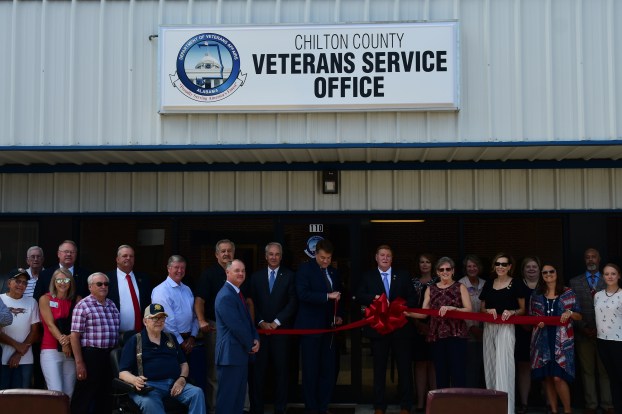 Military veterans in Chilton County will now have more readily available options at their disposal following the official opening of a Veterans Service Office at 110 Sixth St. S in Clanton.

The ribbon cutting ceremony was held at the location June 4, as a crowd of local veterans, government officials and Chilton County Chamber of Commerce members attended the event.

“Of the many things that I’ve supported while on the Commission, personally I don’t know if there’s anything that has humbled me like this,” Commissioner Steve Langston said.

Langston helped oversee the project from the start after first bringing it to the attention of the Commission months ago.

“Being a veteran, this is near and dear to me and my fellow commissioners,” Langston said.

Commission Chairman Joseph Parnell thanked Langston for taking charge of the project and spoke about Langston’s evident passion for the cause.

“He’s [Langston] gone above and beyond in a personal capacity,” said Rear Admiral W. Kent Davis, commissioner of the Alabama Department of Veterans Affairs. 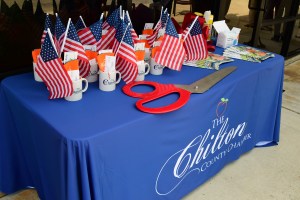 Patriotism was on display during the ribbon cutting ceremony. (Photo by Anthony Richards)

According to Parnell, 3,000 of the roughly 44,000 Chilton County residents are veterans.

“That’s a significant number of people,” Parnell said. “We don’t take that lightly.”

The Veterans Affairs Office will join Disabled American Veterans Chapter No. 33, which is located in the courthouse, as resources available to help veterans in need.

“People think of the 3,000 veterans [in Chilton County], but they don’t think about that number including their spouses and children,” Langston said. “This will give everyone who needs this access. Being someone personally that has used them [VA], it just removes all the clutter that people have to go through. They make it an extremely smooth process.”

The building features “the most visible sign we have at any of our offices,” Davis said.

Chilton County’s office will be the 52nd in the state.

According to Davis, after having to close VA offices throughout the state in the past, the recent push has been to fill the gaps that had been created.

Chilton County is at the forefront of the re-establishment of the program in communities that had been absent of a home office.

Prior to the office coming to Chilton County, many local veterans had to go to the Shelby County location.

“Alabama is one of the highest states of veterans per capita,” Davis said.

The ribbon cutting had been pushed back from its originally scheduled date due to the COVID-19 pandemic.

“We had hope it would have already been open, but just like the rest of the world, COVID shut us down,” Langston said.

By JOYANNA LOVE/ Managing Editor Members of the Chilton County 911 Board are considering community members to recommend for a... read more