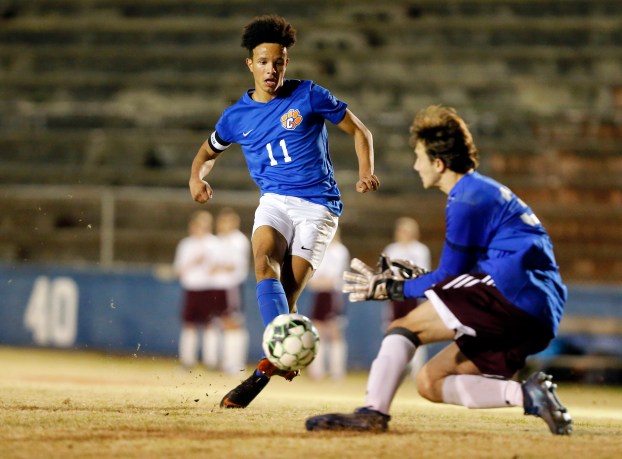 CCHS senior Tyrell Price was going for the state record for goals in a single season before the coronavirus pandemic canceled the season. (File photo)

Some say that records are made to be broken and that is exactly what CCHS senior soccer player Tyrell Price had in mind heading into the 2020 season.

He had his sights set on helping his team succeed en route to challenging the Alabama state record for goals in a single season.

However, the coronavirus pandemic led to the cancelation of spring sports and forced an abrupt end to Price’s goals.

“It would have been a really good season,” Price said. “I’m really sad it had to end that way.”

Although surpassing the single-season state record of 80 goals may have been viewed as a lofty mark to chase, Price saw it as well within reach after approaching the record by scoring 67 goals in 2019.

“I think I would have made it,” Price said. “I love scoring goals, and I know that if I put in the work that the goals would come.”

That confidence was spurred on by the fact that Price and the Tigers would have had about a handful of more games scheduled as part of their regular season slate in 2020 as opposed to the prior campaign.

That would have meant more opportunities for Price to score and increase his total from the year before.

Price has looked like a natural since taking over at the striker position three years ago.

As a striker, scoring goals is expected but Price was able to rise those expectations to a level not often seen. 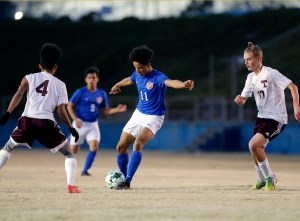 Price’s nifty moves with the ball at his feet made him hard to tackle in space. (File photo)

“My play is a mix between hard work and talent,” Price said. “I put the hard work in to make my shot perfect.”

His scoring prowess is one of the reasons he is committed to play soccer for the UAB Blazers next season.

He attributes the success at the front to having grown up playing as both a defender and midfielder over the years.

“Physicality is the mindset as a defender, and vision is needed as a midfielder,” Price said. “Playing these positions helped me understand how the [opposing] defense was preparing to attack me.”

Despite exhibiting an uncanny ability to put the ball in the back of the net, he also took advantage of opportunities to set up his teammates with excellent chances as well.

Price loved the way the team was coming together under first-year head coach Brandon Gurganus prior to the season being called off.

“He’s pushed us to work and develop,” Price said.

When he’s not playing for CCHS, Price is also a member of Alabama FC travel team, which is a collaboration of the leading youth soccer clubs in the region.

“It might have taken a little bit, but I’ve developed really well,” Price said.

According to Price, he hopes to eventually sign a professional contract playing the sport he loves.

His passion for the sport of soccer was lit when he began playing club ball at 7 years old in his native Germany.

Price moved to the United States with his family when he was 15 years old and it took months before he found a youth soccer organization (Alabama FC) that was the right fit.

“In Germany, soccer is like football over here [in the U.S.],” Price said. “I’ve just always had a passion for it.”

Brazilian superstar Neymar is a professional soccer player that Price believes he shares a lot of the similar characteristics in terms of style of play.

“He knows how to dribble ball and shoot,” Price said.

Price thanked his parents and brother for always being there along the way to support him throughout his journey to this point.

Take one look at Thorsby junior Sawyer Sellers and it is no surprise he is The Clanton Advertiser’s 2020 Boys... read more