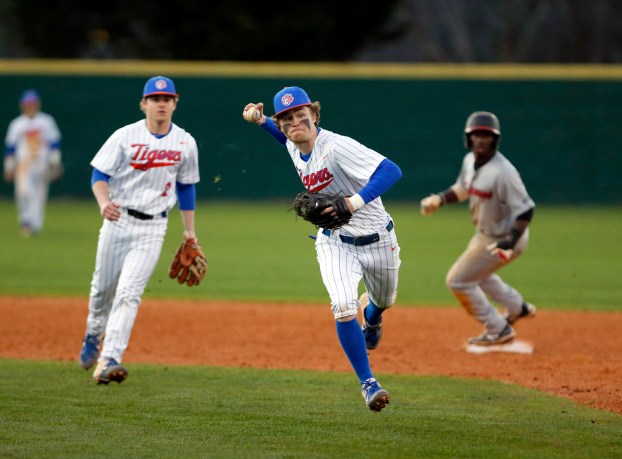 Chilton County's Brady Bolling fields a ball and throws to first base against Sylacauga March 6. (Photo by Brandon Sumrall/Special)

The Chilton County Tigers baseball team improved to 6-2 on the season after a pair of home wins over the Sylacauga Aggies March 6, 6-0 and 7-1.

Game 1 of the evening got off to a bit of a slow start as both teams stranded runners through the first inning.

The top of the second inning would see the Aggies strand another after an inning opening walk that was preceded by three consecutive strikeouts by Tigers pitcher Pico Kohn.

Chilton County would follow it up in the home half of the inning by putting the first points of the game on the board thanks to an RBI ground ball to second that would score Dylan Cullum who previously reached on a walk.

Three strikeouts by Kohn and stingy defense by the Tigers would see the top of the third and fourth come and go with no change in the score.

Meanwhile, Chilton County would add one more during the home half of the fourth thanks to an RBI single by Cullum that pushed Cameron Baker across home plate to make it 2-0.

In the fifth inning the Tigers would tack on more runs thanks to a sacrifice bunt by Brady Bolling and an RBI double by Baker that would push CCHS out in front by four.

The Tigers would add on two more in the sixth inning after three consecutive walks to Dalton Patterson, Kohn and Juan Pablo Morales Israiel would set up an RBI groundball by Eian Headley and an Aggie error that would make it a 6-0 game.

Two more strikeouts by Kohn and a pop fly to the Tiger pitcher would bring a close to Game 1. 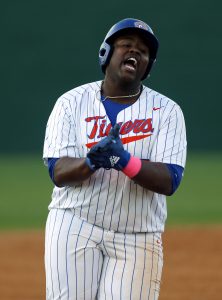 Kohn threw a complete game for the Tigers, while allowing four hits and four walks along with 16 strikeouts.

Headley lead Chilton County at the plate with a 2-for-4 performance that included a pair of singles and an RBI.

Sylacauga would be the first to strike during Game 2 as a leadoff walk came around to make it a 1-0 Aggie lead.

However, a scoreless top of the second would give way to the bottom half of the inning where the Tigers would jump out to a big lead.

An RBI single by Dalton Patterson along with a two-run double by Preston Smith and a two-run single by Bolling pushed the Tigers out to a commanding 7-1 lead.

Neither teams would manage to expand on their run tally during the remainder of Game 2 and CCHS locked down the victory.

Riley Thornton handled pitching duties for the Tigers during Game 2 and threw a complete game while allowing just one run on five hits with two walks and seven strikeouts.

Headley again led Chilton County at the plate with a pair of singles as part of a 2-for-2 performance.