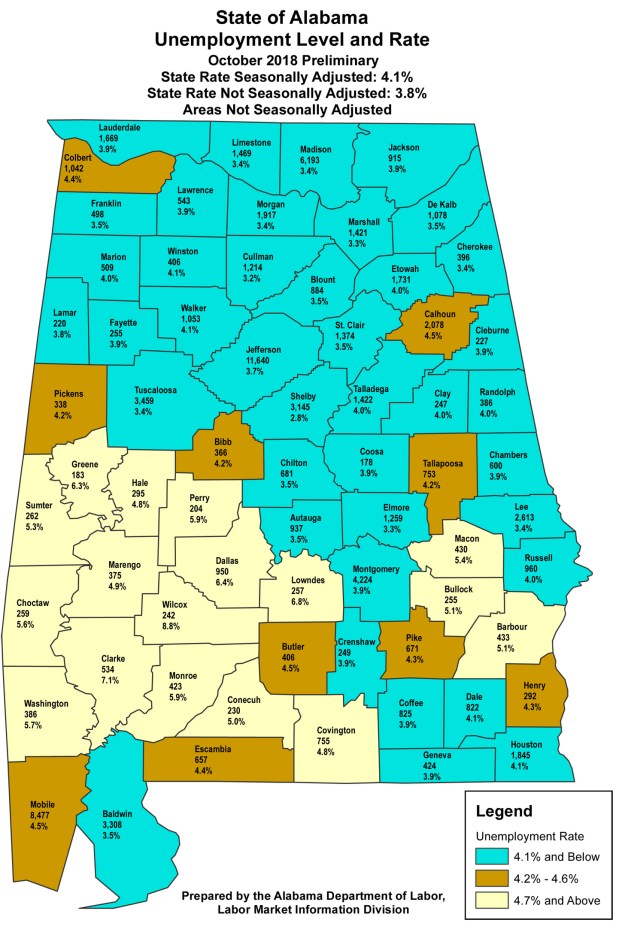 his graph shows the unemployment rate and number of unemployed citizens for each county in Alabama. (CONTRIBUTED)

More people are working in Alabama than ever before for the sixth month in a row, according to the Alabama Department of Labor.

The unemployment rate for the month of October in Chilton County remained fairly steady at 3.5 percent, up just a tenth of a percent over September.

So far this year, the average unemployment rate in Chilton County has been 3.7 percent. While the rate for October is higher than it was this time last year (3.3 percent), that yearly average is still lower than the 4 percent posted in 2017.

“Retail hiring is picking up in preparation for the holidays, but over-the-year gains in high wage industries like manufacturing and construction are extremely encouraging, with yearly gains of 3.88 percent and 2.52 percent, respectively,” said the state labor department.

“The (state) civilian labor force (CLF) increased to 2,212,724 in October, its highest level of 2018, representing a year-over-year increase of 48,254. Over the year, wage and salary employment increased 34,500, with gains in the professional and business services sector (+12,500), the manufacturing sector (+10,200), and the construction sector (+2,200), among others.”
Chilton’s northern neighbor Shelby continues to have the lowest unemployment rate of any county in Alabama, which was at 2.8 percent in October.

Wilcox County remains the highest, which was 8.8 percent last month.
The overall rate for the state of Alabama was 4.1 percent in October, up from 3.8 percent a year ago.

“Wage and salary employment increased in October by 12,200,” said the labor department. “Monthly gains were seen in the trade, transportation, and utilities sector (+5,000), the professional and business services sector (+2,200), and the government sector (+2,200), among others.”

By J.R. Tidwell / Editor Patrons in Clanton and the surrounding area who have been looking for a new food... read more