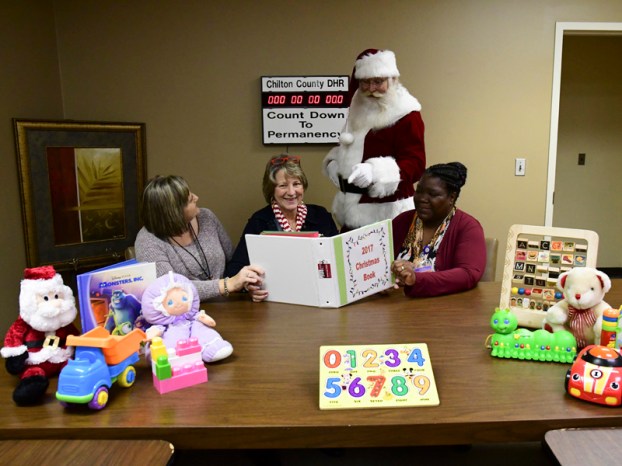 The DHR staff fondly remembers Santa’s 2017 visit to the agency. Although unable to visit this year, he would be pleased that the Christmas Wishes project is continuing. (File photo)

It is that time of year again when Chilton County DHR works on granting the Christmas wishes of foster children.

According to DHR director Marilyn Colson, the number of foster children in Chilton County has increased to 133 since last year.

That increase means that there is even more of a need for donations.

“This presents people with the opportunity to give back,” Colson said. “The community has always stepped up.”

Despite the increase in foster children, Colson explained that more than 100 foster children achieved permanency in the past year either by returning home, being placed with relatives or by being adopted.

Foster parents have adopted 16 children in 2018.

“We want to make Christmas as special and magical for our foster children as it is for children who will be able to spend the holidays with their own families,” Colson said.

Donations will go toward helping the roughly 60 foster children who are still in need of sponsorship.

According to a DHR press release, the state provides foster parents with the essential living needs of the children they care for, but that does not include additional items, such as Christmas presents.

Wish lists from each child in the system have been passed along to social workers and will be matched with those in the community looking to sponsor a child’s wishes.

Anyone looking to get involved in the project can make a financial donation to the Foster Children’s Fund, and DHR can doing the shopping for the children.

Gift cards to popular stores are also accepted as a good gift option for teenagers. There are 37 teens in the county currently in foster care.

Checks can be made payable to the Foster Children’s Fund at DHR and sent to P.O. Box 1699 Clanton, Alabama 35046, while contributions can also be dropped off at the agency on Airport Road next to the National Guard armory.