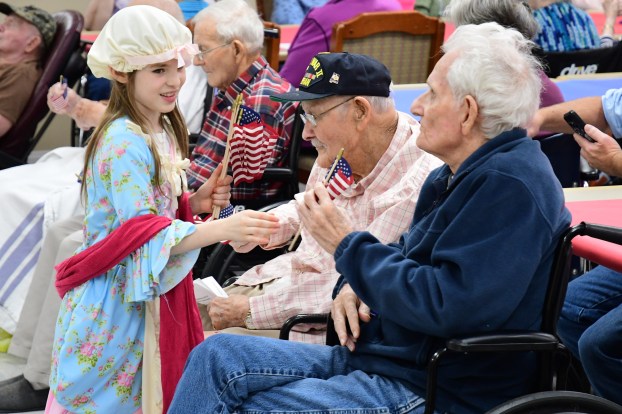 Paige Esco, in character as Betsy Ross, passes out American flags to veterans at Hatley Health Care in Clanton on Nov. 8. (J.R. TIDWELL/ADVERTISER)

SouthernCare Hospice Services recently partnered with Hatley Health Care and Senior Connection in Clanton in order to host Veterans Day programs at each of those locations.

Volunteer coordinator Lisa Nicholas with SouthernCare and a handful of helpers went to Hatley on Nov. 8 and Senior Connection on Nov. 9.

“We are here to recognize the veterans that live in the facility,” Nicholas said after the program at Hatley. “We do this every year.”

Dr. John VanValkenburg performed in character as author Mark Twain at Hatley, complete with outfit and wig. He spoke about both Twain’s life and some of the events in his books about Tom Sawyer and Huck Finn.

He also performed a few songs while playing an autoharp after his speech.

“I am 88 years old,” VanValkenburg said. “I have been in higher education for 60 years. I used to do programs for the Snowbirds who came down. I found that often they didn’t have any recreation other than going to the beach, so I started doing these programs. I do Heritage of the Indians, Indian Religious Beliefs, The Magic of Poetry; I’ve got 80 poems up here memorized; I do the History of Mardi Gras (and several others).”

DAV member Barbara White handed a plaque and certificate to each veteran at the facility and saluted them after each of their names was called aloud.

Betsy Ross, played by Paige Esco, gave a speech on the historical figure sewing the first American flag for George Washington. She also handed a small flag to each of the veterans.

“I am so humbled and honored for their service,” Nicholas said. “It is because of them that our country is free, and it’s the best country in the world.”

Nicholas poured colored sand into a jar during the event as well, with each color representing some aspect of a veteran’s life.

During the program at Senior Connection, VanValkenburg dressed up like a Pilgrim and gave a speech on the history of Thanksgiving.

He also spoke about some of his own personal experiences while speaking on our country’s history, including finding fossilized crustaceans and a stone that was once inside the gizzard of a large plant-eating dinosaur in Texas.

Esco performed once again as Betsy Ross and handed out flags to the Senior Connection members who are veterans. White honored these veterans as well, and Jason Melendy, a current member of the armed forces, handed them plaques and certificates.

VanValkenburg is a veteran himself. He served in the U.S. Air Force in Guam as part of the Air Weather Service during the Korean War. During those days, someone would have to take a balloon out onto the runway in order to determine which direction the wind was coming from.

“We had a transmission center that transmitted information to Hawaii and then onto the states,” he said. “They put me in charge of that. Through my men, we ran more good copy than had been run since World War II.”

By JOYANNA LOVE/ Senior Staff Writer The Chilton County Board of Education and former Superintendent Tommy Glasscock are being sued... read more