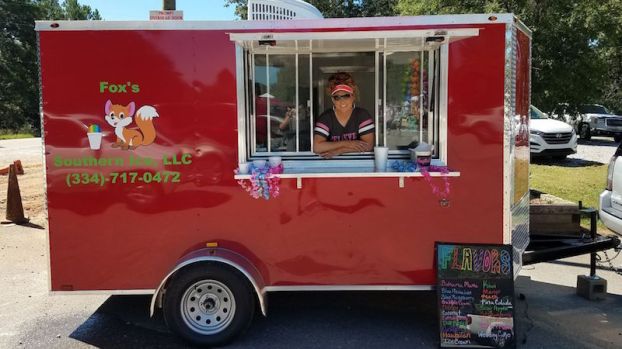 The mobile shaved ice unit is run by Crystal Fox of Verbena.

Fox, who is a nurse at St. Vincent’s Chilton, said she had been looking for a side opportunity to be more involved in the community.

“I wanted something completely different from what I did every day,” Fox said. “Something fun that would allow me to get involved with the community.”

She became interested in shaved ice after seeing a shaved ice vendor at an arts and crafts show in south Alabama.

The ice is different than the flavored ice or snowballs that residents may be more familiar with.

Fox said she thought it would be a good fit because there are no other locally-owned shaved ice vendors in Chilton County.

There had been a shaved ice place in Chilton County when Fox was a child, and she said she “wanted to bring that back.”

She plans to be at local festivals and events, in addition to being available for parties and school events.

Fox said she hopes to partner with local schools as a fundraising opportunity.

Plans for the business became serious in May.

Delays in outfitting the food trailer that Fox tows with her truck meant opening was delayed until this month.

“We were hoping to get started earlier in the summer, but I had to have it built in Georgia,” Fox said.

In addition to being inspected by the health department, Fox has also attended training with Southern Snow.

“I went to Southern Snow out of in New Orleans and actually spoke with the owner,” Fox said. She said Southern Snow has been owned by the same family since the 1920s. Fox bought her machine and syrup from them and mixes the flavors herself.

“They educated me on how to mix everything properly,” Fox said.

Her personal favorites are Bahama Mama and Pina Colada with cream. She hopes to add additional toppings as her business grows.

She said the Bahama Mama has a lot of fruit flavor with a little bit of coconut.

She said her husband Carson and her mother Francis “Tiny” Johnson were very helpful getting Fox’s Southern Ice up and running.