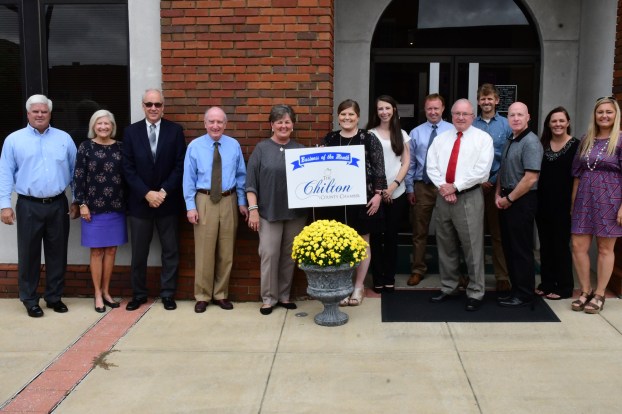 When Francine Wasden took over as director at the Chilton County Chamber of Commerce, one of the ideas she brought with her was naming a business of the month from among the Chamber’s members.

October marks the third month the Chamber has done so, and Peoples Southern Bank was selected for the honor.

“It’s great. We certainly hope we are making a contribution to the community. It’s a real honor to be business of the month,” said Peoples Southern Bank president Richard Moore.

According to Chamber board member Billy Singleton, Peoples Southern Bank has been in business since 1901 (which Moore confirmed), and the original building front still stands just down the street from one of the two current entrances to the bank.

“Think about that,” Wasden said. “Soon, there is going to be a change in that. We wanted to recognize them this month and let them know how much we appreciate them.”

Moore has been with the bank for a healthy portion of that time.

“I have been here let’s say more than 25 years,” he said. “We do all sorts of banking products. We are a local community bank. We make loans and handle people’s accounts, that sort of thing.”

When asked about how the bank has managed such longevity, Moore said, “We keep a community base, and we will continue doing that going forward.”

Wasden said she is happy with how the business of the month honor has been going.

“I think has been going great,” she said. “It gives us an opportunity to recognize these important businesses we have. We enjoy it, and we feel like they do to. It’s a good time to recognize (Peoples Southern Bank).”