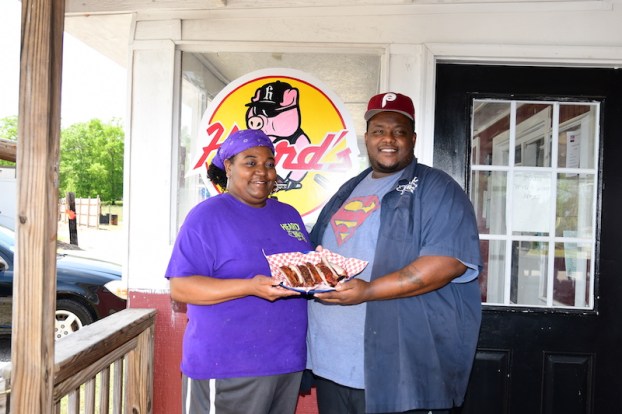 Shakira and Roman Heard display the ribs that have made them a local favorite. (JOYANNA LOVE/ADVERTISER)

Smokin’ on the Boulevard was named the winner.

Owner Roman Heard said he was initially disappointed at not winning the overall contest decided by a panel of judges, but he did not stay that way for long.

“The People’s Choice award is what it’s all about because that is what drives the business,” Heard said.

Heard’s BBQ received the most votes in the initial portion of the competition, which qualified him for the judged portion.

It was a customer that initially nominated Heard’s BBQ, and then let Heard know about the contest.

“The business has grown a lot just from the publicity behind it,” Heard said. “We have a lot of new customers coming in that just strictly want to try the ribs.”

Heard said he would welcome the opportunity to participate in any other Alabama Farmers Federation contests in the future.

“The judges were cool and down to earth people,” Heard said.

Heard’s BBQ on Alabama 22 in Maplesville is open Monday, Wednesday, Thursday, Friday and Saturday from 11 a.m. to whenever the restaurant sells out of food.

The restaurant is also open for afternoon hours on the third and fifth Sunday of each month.

Adi Argent was the first basketball player from Chilton County High School to be selected to play in the AHSAA... read more