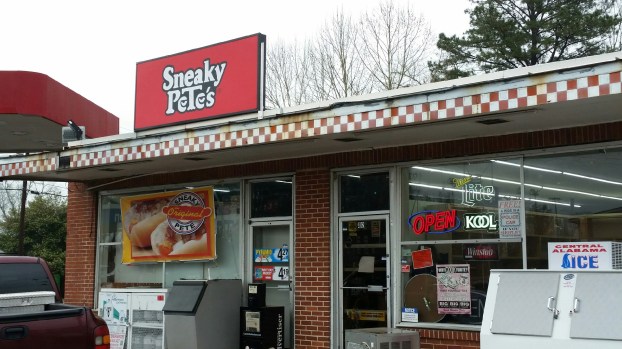 People looking for a place to eat in Clanton will soon have a new option.

“This is the first time we have been in Clanton,” said Doug McMinn, the operations manager for SP food services in Birmingham. “The owner here approached us a few months ago about adding this to the store. He has contacts with people we already do business with in the convenience store industry, and he contacted us through them. We sat down and talked a few months ago and started working on it. We were happy to come down here.”

The exact date the new Sneaky Pete’s will be in full operation is still somewhat up in the air, but McMinn said they expect to be open for business the week of March 12.

“We should be open some time next week,” he said on March 6. “We are doing some training the rest of this week.”

Sneaky Pete’s is known for its hot dogs, but McMinn said the franchise has added some new items to the menu recently.

“Obviously, our hot dogs are our mainstay,” he said. “We feel like we do the best hot dogs, particularly as far as Birmingham is concerned.

“We also do burgers, Philly cheesesteak and we have some wraps now. This menu board layout is the second one we’ve had in the company, and it has a lot of new stuff. We aren’t just hot dogs; people will have something else to eat.”

McMinn said Sneaky Pete’s opened a location in Jemison about a year ago, which makes the new restaurant at Lil Suzy Q the second to come to Chilton County.

McMinn said the new location is planned to be open for breakfast starting at 4 a.m. and running to 10:30 a.m. The store will then serve lunch/dinner items until 10 or 11 p.m.

“It gives people another option, but it is also something different,” he said. “We use a lot of proprietary items. We have our own special sauce that is made for us. Our chili is the same way. Our beef topping is a private item.

“We have different things that are specific to us. We do a lot of things to order to keep it fresh. We use real eggs that are to order in the morning, not powdered or liquid eggs. We have breakfast plates with grits, gravy, hash browns and so forth. It’s a little bit different than some fast food places.”

McMinn said that Sneaky Pete’s is excited to be opening up a new location in Clanton and that there has already been even more interest in the franchise.

“Since we started getting put into this store I have had several people in this area and south of here contact us about adding into other stores, so we’ll see,” he said. “Right now we want to get this one going, then go from there.”

Crops about 2 weeks ahead of schedule

By JOYANNA LOVE/ Senior Staff Writer Chill hours are adequate and local produce is on schedule to be ready two... read more