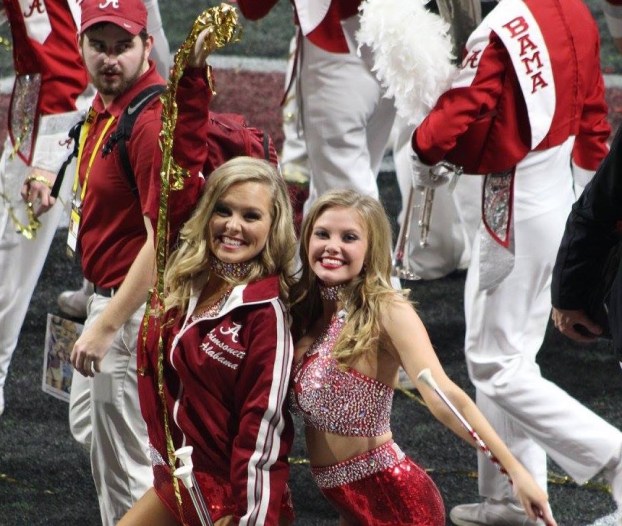 Performing as a Crimsonette in the University of Alabama’s Million Dollar Band had been a dream for Chilton County High School graduate Anna Calhoun since her first year of high school.

After making the team last fall, Calhoun, along with fellow Chilton County native Avery Wyatt, was able to perform during the Crimson Tide’s 2017 – 2018 Championship run and the Championship game itself.

“It was so awesome,” Calhoun said. “I had never been to a college championship, let alone twirl at one, so to be there was an absolute dream. But, to be there and actually be on the field and be a part of something so cool was just amazing … I couldn’t have asked for a better season.”

At the Championship game, the Crimsonettes performed its “When a Man Loves a Woman” routine.

Her journey to the Championship game performance began with boot camp last summer.

Calhoun said she enjoyed meeting all the other Crimsonettes and finding out how they became interested in twirling.

She said everyone has been encouraging throughout the season, especially Wyatt, who is in her second year as a Crimsonette.

Calhoun said it was good to have Wyatt there to help her know what to expect.

“It really helped me, and I am super glad that I had her,” Calhoun said. “I don’t know what I would do without her. She was so helpful and so willing to answer any of my questions.”

This season, the Crimsonettes had two routines: “When a Man Loves a Woman” and a burlesque show.

Calhoun said practice could be “brutal, ” but “it’s all worth it on Saturday night.”

“The atmosphere is just awesome … when you just look up and you see all of the fans cheering,” Calhoun said.

The burlesque show allowed each Crimsonette to show their individual talent.

Calhoun said unlike the routines the group normally performs, where they are all in sync, this routine allowed them “to freestyle a little bit.”

“To have everyone do what they are good at was really neat and a good experience for the Crimsonnettes,” Calhoun said.

Prior to high school, Calhoun said she had taken a break from twirling, but returned to it and made the CCHS line. She said two of her twirl teachers were former Crimsonettes, and they encouraged her to consider it in college.

“They had talked about it a lot, and it was just always a dream,” Calhoun said.

She was further encouraged by seeing other women from Chilton County “make the line” for the Crimsonettes.

“In my freshman year in high school, I kind of got in my mind, ‘These are my preparation years and I am going to try out for Crimsonettes,'” Calhoun said.

It has also been a good semester for Calhoun academically. She has a 4.0 GPA.

She said it was tough, but staying organized helped her get everything done.

Calhoun is an accounting major. She said she looks forward to working with people and the flexibility possible in the field.