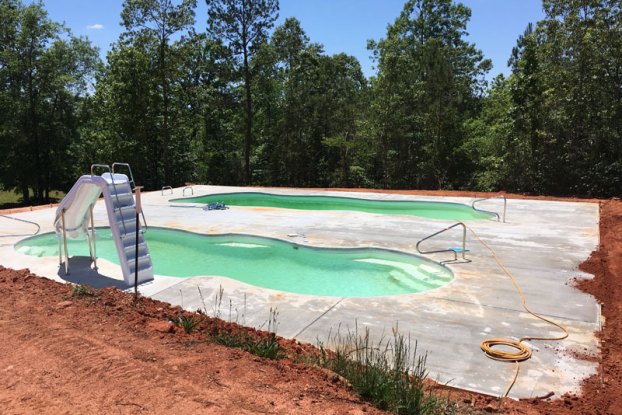 The new pool will allow campers at Raleigh’s Place to enjoy the pool without having to be shuttled across town first. (Photo by Steven Calhoun)

Raleigh’s Place recently built a pool for foster children to use during the organization’s annual summer camp.

Funds for the pool were raised in the community during the month of December and matched by McKinnon Nissan in Clanton. Raleigh’s Place Co-founder Sharon King said the project cost about $70,000, and the challenge helped gather the funding much faster than would have been possible if the organization did it on its own.

“The McKinnons … their heart’s really for this ministry. They felt like they were led to do this challenge, and then God really blessed it and the rest of the community came on board,” King said.

Building a pool had been a goal for the nonprofit for a couple years. Previously, the camp had to shuttle students back and forth to the YMCA pool, which added costs and cut into valuable pool time for the children.

Raleigh’s Place tried to raise the funds to build a pool a year ago, but the support was not as strong as it was in the recent fundraiser and its efforts only raised a fraction of the cost, according to King.

Now, the nonprofit’s goal has been reached and the children can enjoy time in the pool without being shuttled to and fro.

The pool is split into a shallow side and a deep side to accommodate younger campers who cannot swim as well. The shallow side has a slide in it and the deep side will have a diving board installed.

There are plans to add a bathhouse after this summer’s camp when enough funding is raised.