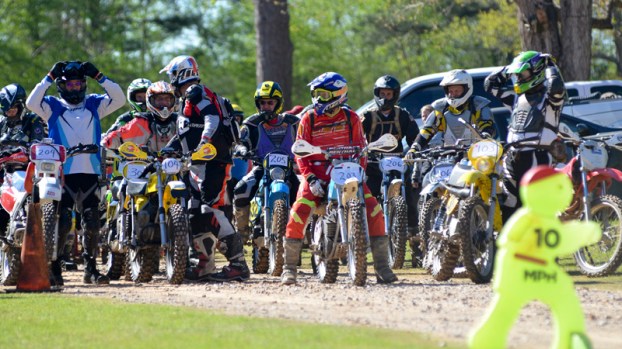 Riders line up for the start of the event. (Photo by Anthony Richards)

The Perry Mountain Motorcycle Club took a step back in time as host of a national qualifier for the American Historic Racing Motorcycle Association [AHRMA] on April 8 and 9.

The two-day competition featured vintage motorcycles from the 1960s, 70s and 80s. The dirt bikes specialize in enduro racing, which often takes place on trails through wooded areas.

Bikes from 1975 and before are considered vintage, while those in 1976 and after are post vintage.

It was a test of endurance for both the bikes and the riders, many of who matched the age of the bikes that they were riding.

Some of the glaring differences between the older bikes and the newer models are the advancements that have been made in braking and suspension.

“You’re used to 14 inches of suspension on a new bike, as well as an electric start,” Ceebo Craig said.

One of the key requirements for bikes was the absence of disk brakes.

“These bikes are old and it gets hard to get parts for them to keep them together,” Craig said.

There were three portions of the event, which included various enduro courses, as well as an acceleration test and a grass track.

Each stage of the competition was timed and factored into that rider’s overall result for the day.

About 60 riders took part in the event from multiple states, along with a handful of riders from Chilton County and the Birmingham area, including Craig who is from Clanton.

Roughly 60 miles of racing was completed over the two days. It was the third time that Perry Mountain hosted the qualifier, after a year off in 2016.

Terry Dishroon from Covington, Ga. competed at 79 years old. It is something he has been doing on a regular basis since 1960.

“It’s just something that you’ve done for all your life, and you just hate to quit,” Dishroon said. “It keeps me going and in pretty good shape.”

Greg Johnson of Indian Springs is a regular in taking part in events at Perry Mountain.

“Just reliving childhood and slamming into the trees on old stuff,” Johnson said. “I love riding here. It is a great attraction for this area.”

Tim and Polly Grow made the trip down from Ohio and were one of two husband-and-wife tandems to ride in the event. They have been doing so for the past 12 years.

“These are a special kind of folks,” PMMC president Brad Belcher said. “They’re out there just having a ball, and that’s what it’s all about.”

By JOYANNA LOVE/ Senior Staff Writer Music floated down the street as people browsed vendors up and down Main Street... read more