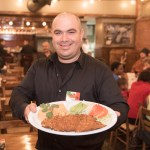 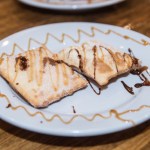 These sopapillas provide a sweet ending to a meal. (Keith McCoy/ Advertiser) 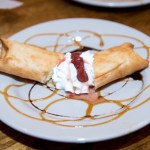 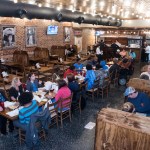 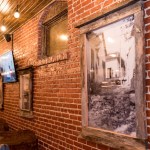 Photos of Mexico taken by the owner are featured on the walls of Valle Grande Mexican Grill. (Keith McCoy/ Advertiser)

The dishes served at the restaurant are a combination of family recipes and dishes developed by cooks who have worked at Sanchez original location in Valle Grande.

“My whole family, we have been in the restaurant business for a long time,” Sanchez said.

Some seafood dishes were added to the menu after they were suggested by a cook from southern Mexico.

Grilled chicken quesadillas are one of the restaurant’s most popular items.

“Most Mexican restaurants they use typical old school, Mexican dishes, but we have kind of revamped them,” Sanchez said.

The majority of the meats used in the restaurant are grilled.

Sanchez’s favorite dish is the milaneza chicken. A chicken breast is flattened, then seasoned and breaded. The meat is deep fried and served with rice.

“We have gone away from the traditional … burrito and the nachos. We have expanded a lot more in our food,” Sanchez said.

The cook for the Maplesville location spent six months at the Valle Grande location training before opening day. The menus at the two locations are the same.

“If we have customers from the other town, they will never know the difference from one restaurant to the other and the taste,” Sanchez said.

The restaurant also has Americana offerings such as steak, chicken sandwiches and wraps.

“Throughout the years, Mexican restaurants have learned that you have to have those kind of items,” Sanchez said.

He said in the past he had seen children coming into the restaurant carrying a bag from a fast food restaurant because the parents wanted Mexican, but the children did not like it.

“We introduced things like the chicken finger, so the whole family can be there,” Sanchez said.

Lacee Wallace of Maplesville chose the chicken quesadilla for lunch on opening day.

Extensive renovation was done to prepare the building for opening. The original wood ceiling is featured over the dining area. Sanchez said the ceiling had been covered in layers of paint and hidden by a drop ceiling. He said it took 29 days of sanding to restore the ceiling to its natural look. Black and white photos of Mexico taken by Sanchez are featured on the walls. Each photo is in a wooden frame created from Maplesville wood. The tables and bar were also created specifically for the Maplesville restaurant.

For those who have just a little room left for dessert, Valle Grande serves sopapillas, an airy fried dough dessert covered in sugar, and deep fried cheesecake.

Sanchez said he had driven through Maplesville in 2014 during a car event his Valle Grande location near Selma hosted.

“I love like the old feel of the town,” Sanchez said.

“Our margarita consists of more than six, seven ingredients to make that special flavor,” Sanchez said.  “We have one margarita and it’s our house special margarita.”

Employees from the original Valle Grande were on hand for the Maplesville opening. The restaurant will typically have 10 employees.

Sanchez came to the United States at the age of 15 to join his brothers. He got a job in the Mexican restaurant where they worked. At 19, he left to work for the cable industry. In more recent years, he has returned to the restaurant business.

Valle Grande Mexican Grill is located at 9417 Alabama 22 in Maplesville.