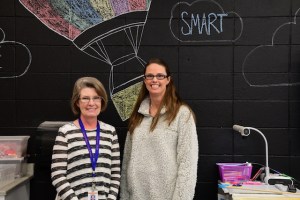 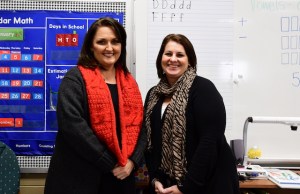 CLANTON —Three classes at Clanton Elementary, one from each grade level, have been a part of a pilot project to have a classroom with two co-teachers.

After half a year of the combined classroom, teachers seem happy with the result.

“I feel like our children get so much more one on one time,” kindergarten teacher Ginger Ricks said.

Because each combined classroom has more than 30 students, much of the teaching is done in small groups.

“They [the students] seem to be more advanced this year … they are getting the concepts quicker,” Ricks said.

Miller said this was especially evident at the beginning of the school year when they were implementing classroom rules.

Miller and Ricks had worked closely in the past, as had Owen and Holsenback.

Miller said she and Ricks assisted the other’s students in areas the other might have been stronger.

In preparation for the new arrangement, Owen said they focused on working out the details of how to successfully have this many students in one class and division of duties.

Owen said each of the students is in a small group with each teacher every day.

Ricks said having two teachers had made many aspects of using technology in the classroom smoother because one of them can help children log back into the program without stopping instruction for everyone.

Having a similar teaching style has also helped, Ricks and Miller.

Miller said each of them teach all the subjects when divided in small groups. Ricks said if one of them is teaching the whole group, the other is “walking around helping” students and keeping them on task.

“I feel like because there are two of us we are able to meet the needs of our kids easier,” Miller said.

Miller said the setup also helped increase consistency for the students if one of them ever had to be out for a day or more.

“That is a big advantage that we didn’t even think about,” Miller said. “You don’t feel like you play catch up when you get back.”

Owen said merging the resources of the classrooms has allowed students to have time on computers and iPad each day. Whereas, other students are getting time on one or the other of the devices.

“I am an older teacher. I struggle with technology and she [Owen] has been my blessing,” Holsenback said.

Owen said she has enjoyed working with a teacher who had more years of experience.

At student orientation in August 2016, some parents were apprehensive about the set up, but have since embraced the idea.

Students performance data at the end of the year will be used to determine the impact for students having co-teachers for the year.