Partnership creates items for those in need 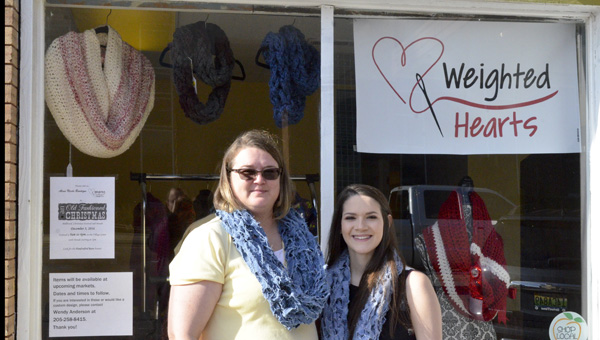 Wendy Anderson and Stephanie Tejada are not your typical business owners, which is what makes their partnership so unique.

Anderson began Weighted Hearts, a store that specializes in making weighted blankets for children with autism and veterans suffering from PTSD, while Tejada makes bowties and headbands for children as owner of Alexa Nicole Bowtique.

They recently combined forces and opened up a shop in downtown Clanton where they create their products.

“There’s not a lot of people that still make things with their hands and create with what they have at their disposal,” Anderson said. “We want to renew that connection with handcrafted items.”

At the moment, the location serves more as workshop than a store, although their products are for sale and can also be custom ordered to suit a certain style or customer preference.

“We don’t mass produce,” Tejada said. “Everything has its own character.”

The two have talked about possibly expanding to retail and creating a storefront atmosphere, but are taking time to see how the initial reaction is from the community.

“It’s really about developing a relationship with the community,” Anderson said. “A lot of people aren’t aware of weighted blankets and the benefits that it offers.”

According to Anderson, the blankets are just like any other blanket, but have built in pockets where items can be put in to add weight, which provides a calming feel and serves as a form of anxiety relief. 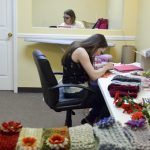 Anderson and Tejada work at their stations designing weighted blankets, headbands and bowties.

“When an autistic child is on the verge of a meltdown, it makes them feel like they are swaddled or cradled,” Anderson said. “For PTSD sufferers, it helps when they can’t sleep.”

Anderson started Weighted Hearts with an understanding of its importance having served in the military and experienced PTSD first hand.

“It really helps during those moments when they feel like they can’t relax or let down their guard and get through that wall,” Anderson said. “Sleep is paramount for a PTSD sufferer.”

One pound should be added to the blanket for every 10 pounds the person using it weighs. The maximum weight for a blanket is 24 pounds.

While most blankets have the weight sewn in, Anderson leaves open pockets that allow for the weight to be adjusted as a child grows or to fit multiple users.

Common household items can be used as weight and easily removed prior to going through a wash cycle. Anderson recommends using rice or dried beans.

“It’s not something that you can just go to Walmart and pick one up,” Anderson said. “It is definitely a specialty item.”

She has also begun making denim quilts that already have a built in beginning weight. It takes about a week, working two to three hours per day, to make a denim quilt.

Tejada began making her newborn daughters headbands and has since run with the idea.

“Children have always been my thing,” Tejada said. “One day it just hit me, that I can do more than work at a typical nine to five job.”

The ultimate goal for Tejada is to donate a portion of her profits to help children with cancer and even visit hospitals with her headbands.

“Anything to put a smile on their face and lift their spirits,” Tejada said. “We’re trying to get it rolling and hopefully we can get there soon.”

In order to raise the necessary finances in the beginning, Anderson is also willing to create memory quilts.

Those interested in the products or with questions can contact Anderson at (205) 258-8415 or email weightedhearts@gmail.com and Tejada by emailing Alexanicolebowtique@gmail.com.