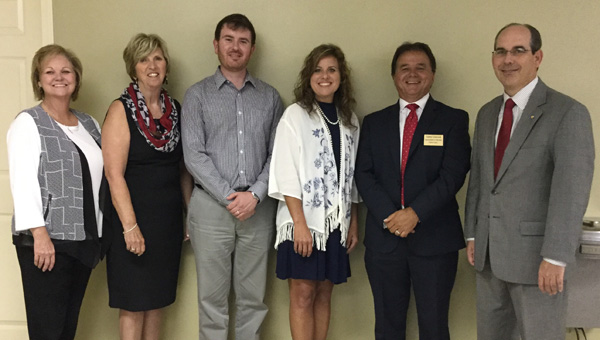 Chilton County Superintendent of Education Tommy Glasscock talked about education in the county and its importance to economic development at the Chilton County Chamber of Commerce luncheon on Tuesday.

Glasscock said his two granddaughters, who are not yet old enough to attend school, are a reason he works to promote education in the county.

“If you’re going to be involved in something, you’ve got to bring something to the table,” he said.

The superintendent presented some stark realities for those in attendance at the Clanton First United Methodist Church Helen Parrish Activity Center: less than 18 percent of Chilton County graduates earned a four-year degree over a six-year period during which the state average was 28 percent.

“There’s no way we’re going to move forward in education if we don’t accept where we are,” Glasscock said and then talked about efforts to improve education in the county:

•Since January 2015, 2,100 computers have been purchased for use by the school system, Glasscock said.

•All schools have been changed to be on the same schedule.

•The system is going through district accreditation.

•A capital planning committee has been formed to address needs in the system, including Chilton County High School being full and “extreme growth” in the northern part of the county.

•Science, technology, engineering and math, or STEM, teachers are working from various schools in the county instead of being tied to a specific classroom and set of students. Glasscock said the arrangement allows all students in the county to benefit. “Instead of the marquee out front of the school, they’re more concerned about what education in our community looks like,” he said.

Glasscock issued a challenge to the community that corresponds to the system’s motto of, “Give us your best.”

“What can you do to help us,” he said. “We need you to believe in what we’re doing.”

Glasscock recognized school administrators and Board of Education members Lori Patterson and Curtis Smith, who were in attendance.

The next Chamber luncheon will be Nov. 1 at CFUMC, with guest speaker Liz Huntley.

Board of Education approves annual budget

By STEVEN CALHOUN/Staff Writer The Chilton County Board of Education met Tuesday, Sept. 13 to approve the annual budget for... read more