Police readying for new law that gives them more authority 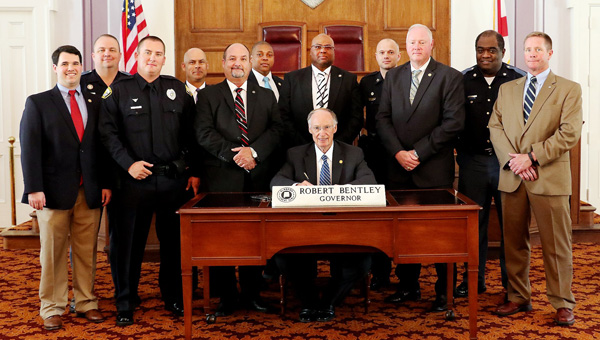 Bill signing: Clanton Police Department Capt. Neil Fetner (fourth from right) was among those present at a ceremonial bill signing by Gov. Robert Bentley on May 10.

Clanton Police are preparing for a new law to take effect that will grant officers more authority in some traffic cases.

Gov. Robert Bentley signed House Bill 1 into law on May 10, and it will take effect Aug. 1.

The law will go into effect Aug. 1 and have an effect on local police and the traffic cases they work, Clanton Police Department Capt. Neil Fetner said.

“Prior to this law going into effect in August, officers—no matter whether it’s state, county or municipalities—we are not authorized to make arrests or write tickets for things that do not physically occur in our presence,” Fetner said.

The law would apply to wrecks and other traffic cases.

Fetner said the law will allow officers to issue citations for traffic offenses that did not occur in the officers’ presence but does not mandate that they do so.

Fetner said most if not all Southern states have such a law on the books and usually make it mandatory for officers to issue citations.

Officers already investigate wrecks for violations but are not authorized to issue citations if they did not see them happen.

“This will bring a paramount level of accountability to those who operate on our highways with no license and no proof of insurance,” Fetner said.

Fetner CPD has circulated emails among officers to let them now about the pending change.

“They know that on Aug. 1, they will have a little more authority than they have had in previous years,” Fetner said. “A lot of people look at it like government giving police more authority to inflict pain, but that is not what it is supposed to be at all. It was designed to hold those who operate motor vehicles to more accountability. Before, you had people who were being negligent, but there was no accountability for that.”