The Cellebrite software was purchased after the department received grants totaling $9,000 from the U.S. Justice Department, and installed on an existing forensics computer maintained by Capt. David Clackley. 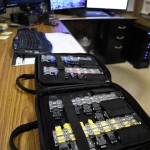 Phone search: A collection of cables and adapters accompany new digital forensics software purchased by Clanton Police Department. There are adapters for any kind of phone police could need to search. (Photo by Stephen Dawkins)

Clackley has also received specialized training in the area at the National Computer Forensics Institute in Hoover.

If police obtained a cell phone they thought could contain information relevant to a case, the phone is simply plugged into the computer, and the software provides access to photographs, text messages, call logs and other information.

Permission from the owner of the phone or a warrant would be required before any search.

Since the program went into service in late May, Clackley said it has proved useful in several instances.

The software has allowed police to find information about reported missing persons, and Clackley said he is working on a case of apparent exploitation of a child, in which cell phone data could make a difference.

Before implementation of the program, a cell phone would be sent off to Montgomery to be processed, which could take as long as six weeks.

“At best, it was a trip to Montgomery and at least a week to get something back,” Clackley said. “Now, it’s hours.”

The amount of time saved is important even in cases that are not deemed urgent.

Other police agencies in Chilton County are likely to take advantage of CPD’s new capabilities and seek assistance with digital evidence collection in Clanton as opposed to somewhere farther away.

The software includes a collection of cables and adapters that allows police to pull data off any kind of phone.

Depending on the type of phone to be searched, a certain adapter is used to plug the phone into the forensics computer. Shortly thereafter, the computer pulls up a report detailing what kind of information is on the phone.

Clackley can skip over information that would not be useful and focus on anything that might be relevant to a case.

“It does a lot of the work for you,” Clackley said.

And the computer contains a feature that ensures no changes are made to the files on the phone, so that there is no question about the findings being admissible in court.

Clackley stressed that the program is not used to “spy” on innocent residents but instead is simply a tool that can be used when police have obtained a phone and have reason to believe its contents would be relevant to a case.