Brittany Bivins and Luis Vasquez were married on March 24, 2012, at the Alabama 4-H Center in Columbiana at 3 p.m.

The bride is a 2006 graduate of Chilton County High School and a 2011 graduate of the University of Montevallo.

The groom is a graduate of Thorsby High School. 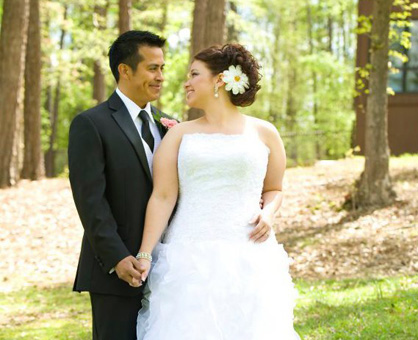 The ceremony was held at an outdoor chapel at the Alabama 4-H Center.

The reception was held at a lakeside pavilion at the Alabama 4-H Center.

Music was provided by a mariachi band. Full Moon Barbecue catered the event, with Mexican cuisine provided by the groom’s family.

Following a honeymoon in Gatlinburg, Tenn., the couple resides in Bossier City, La., where the bride works as a TV reporter with the local Fox affiliate, and the groom works as a carpenter at Hardware Resources.

Alana Michelle Moore and Clarence Brittin Turner V were married on June 2, 2012, at Southern House and Gardens in... read more